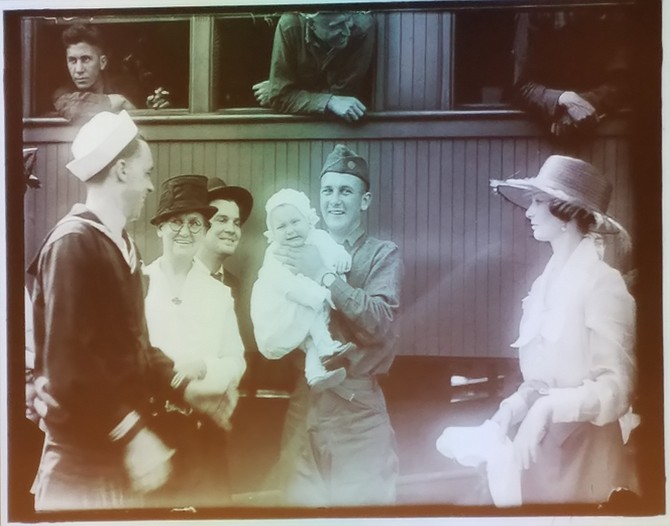 Shy just four days of the 100th anniversary of the armistice, a lecture was held at Arlington Central Library last week in honor of fallen soldiers. Nonprofit community organization Arlington Sister Cities Association (ASCA) which promotes “Citizen Diplomacy,” united with the Arlington WWI Commemoration Task Force — an extension of the Centennial Commission created by Congress in 2013.

The commission was created to educate citizens about the “causes, courses and consequences of the war, honor the heroism and sacrifice of Americans who served, and commemorate through public programs and initiatives.”

Ordained priest and board chair of ASCA Malcolm Phillips introduced speaker Col. Robert J. Dalessandro (U.S. Army-Ret.), an expert in military history and author of two books on the subject. He addressed Armistice Day to a group of Arlingtonians on Nov. 7 and was joined by vice chairman of U.S. WWI Centennial Commission Edwin Fountain and historian Allison S. Finkelstein, Ph.D.

The lecture, titled “The American Expeditionary Forces Go to War: How the American Army Came of Age in the Decisive Battles of World War I” was started by Dalessandro. As a battlefield tour guide, he gave a play-by-play of the crucial moments leading up to the end of the war.

Fountain, the concluding speaker, said WWI was “considerably the most consequential event in world history and American history, which profoundly changed the role of many sectors of American society.” Specifically, women might not have won the right to vote in 1920 if not for WWI; the assimilation of immigrants into the country was accelerated; the civil rights movement gained momentum; and the role and relationship of the government to its people is still a topic under debate.

Finkelstein, who is part of the collaboration with Sister Cities and on the board of Centennial Commission, added that WWI brought a “new intensity of federal involvement in American lives and can also be seen in the expansion of different federal agencies, such as the creation of the Veterans Bureau, which begged the question, what does the government owe our veterans?” A few veterans sat among the audience, many of whom had grandfathers and grandmothers who lives were impacted by the war. After the war ended, veterans were housed in Arlington County, which nearly doubled in size between 1910 and 1920, growing from 12,000 to 18,000, according to census records.

Arlington County created a special citizens advocacy group called the Commemoration WWI Task Force in March of 2017 to help foster discussion and educate citizens about history. Educational opportunities have come through lectures, panel talks, film series, and events throughout the year, all leading up to Armistice Day. Their final event culminated on Sunday at the American Legion Memorial in Clarendon. The ceremony included a uniformed doughboy color-guard, the Arlingtones, Opera-Nova, and guest speakers from the Centennial Commission who unveiled the first of the interpretive panels to be placed at the memorial. Grant funding for the panels was awarded to the task force from the Centennial Commission as part of its “100 cities 100 Memories,” to commemorate the history of WWI and the wars that followed.