Calling for Service: Gathering in Great Falls to Honor Veterans 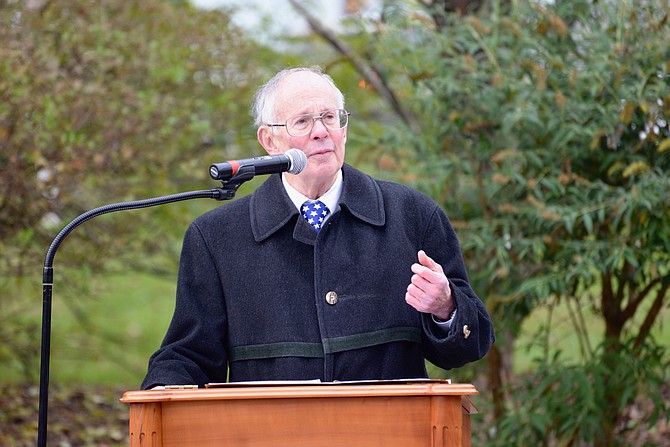 Col. Joseph Gordon, United States Army, Ret. was the keynote speaker at the Great Falls Veterans’ memorial. Gordon called for the need to “reignite our sense of service” as one way to help unify the country and to spread goodwill around the world. Photo by Andrea Worker.

The Langley Madrigals amazed, singing the National Anthem and a number of patriotic selections, their voices echoing around the Great Falls Freedom Memorial plaza. 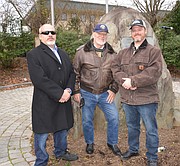 The Foley family and their construction companies not only helped build the original Great Falls Freedom Memorial, but in October, they donated their time and labor to improve the site, which was beginning to sink over time and included some difficult-to-navigate slopes and berms. The Foley’s levelled the surrounding slopes to make more room for seating, re-sodded and added additional lighting.

It has been one hundred years – the 11th hour of the 11th day of the 11th month of 1918 - since the signing of the Armistice that officially ended World War I. One year later, on Nov. 11, 1919, the first “Armistice Day” commemoration was held to honor the service of those who fought in that war.

The passage of the years and the continuation of global conflicts has seen the evolution of that day of remembrance, with “Armistice Day” becoming “Veterans Day” with the purpose to honor all veterans, wherever and whenever they served.

On Monday, Nov. 12, at 11 a.m., residents of Great Falls gathered at the Great Falls Freedom Memorial behind the Public Library to do just that – honor those who served to protect our freedom.

THIS YEAR, thanks to the generosity and hard work of the Foley family and their construction companies, those who attended had more seating space available to them, additional standing spots, and less potential for a trip up – or down – the slowly sinking berms and slopes that had surrounded the site. Wayne Foley and his sons Kyle, Shawn and Ryan created the plans and then did the work in early October, levelling, re-sodding and repairing signage, with everything ready for the Veterans’ Day ceremonies.

The Colors were presented by the Color Guard Detachment of the U.S. Marine Corps, the Invocation was given by Pastor Livingston Dore of the Great Falls Methodist Church, and a selection of patriotic tunes, including the National Anthem and “America the Beautiful” rang out within the memorial plaza courtesy of the Langley High School Madrigals choral group, under the direction of Dr. Mac Lambert.

Gordon served thirty years in the Army, both on active duty and in the reserves, with assignments in Germany, peacekeeping in Bosnia and Kosovo, and as a member in the U.S. Military Delegation at NATO headquarters in Brussels.

In addition to his military services, Gordon used his educational achievements, including his Ph.D. in European History from Duke University, being a Fulbright Scholar at Marburg University in Germany, to pass along his knowledge. He has taught at Duke, the Army Command and Staff College, the National Intelligence University, the NATO school and other educational facilities around the world. He adds accomplished singer to his resume, performing as a member of the Choral Arts Society of Washington and the Washington Men’s Camerata. He described singing in Red Square in Moscow in 1993 as one of the “highlights” and “most moving moments” in his career.

“First, to recognize all our veterans, which is why we are really here.”

Gordon took a moment to observe that it was also the 100th “birthday” of the song “God Bless America.” “Fitting for this occasion,” he said, reminding the gathering that the song’s composer, Irving Berlin, was “an immigrant, born in Siberia, who served in the United States Army.”

And third, Gordon noted what he sees as a decline in the concept of service and an inequality in the fact that rural areas and “middle states” tend to provide the most service members.

Acknowledging that it “wouldn’t be easy and would require a lot of leadership,” the colonel called for a “universal, national service requirement” in replacement of the draft which ended in 1973.

GORDON doesn’t think that such service necessarily means active duty in the military. “The Peace Corps, AmeriCorps, a year or two in service in organizations like that,” he said could reignite Americans’ sense of service and “spread goodwill around the world.”

“We should all share in service to our country and each other. No, it’s not easy,” but he believes to do so would “keep us at peace and safe.”

Before bringing the ceremony to a close, Wilson echoed some of Gordon’s call to service.

“Only about 1 percent of our population serves in the military,” he noted, before reciting the famous quote by Winston Churchill to punctuate his point.

“Never in the field of human conflict was so much owed by so many to so few,” said the British Prime Minister Churchill in a wartime speech in 1940, referring to the British Royal Air Force who were fighting the Battle of Britain at the time.

With thanks to the guests, speakers, participants, and the Foley’s, Wilson closed the ceremony with a few reminders.

“Join us here for Memorial Day next May, learn more about the Friends of Great Falls Freedom Memorial at www.gffreedom.org., encourage its use, and support “Military Appreciation Mondays” at the Old Brogue in Great Falls in support of the “Stop Soldier Suicide,” organized by the Bob Nelson realty Team.