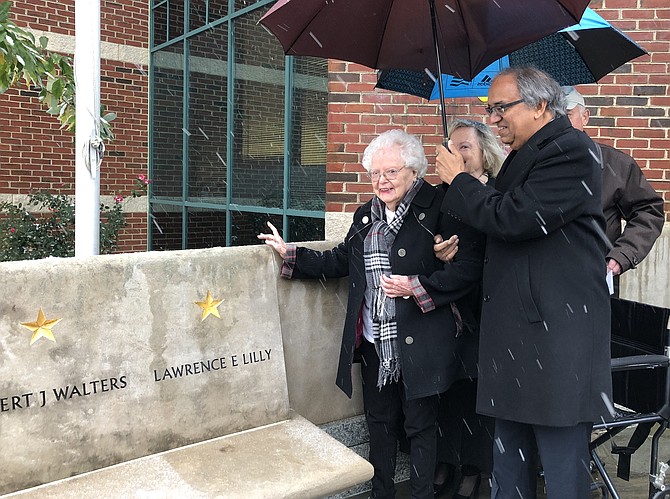 Gold Star mother Jeanette Lilly, 93, stands near the newly unveiled memorial to her son, 1st Lt. Lawrence Lilly, at the Capt. Rocky Versace Plaza and Vietnam Veterans Memorial Nov. 15 in Del Ray. Lt. Lilly was shot down over Cambodia in 1971 and is one of seven POW/MIAs from Alexandria. Photo by Jeanne Theismann.

“I am so thankful to the City of Alexandria for keeping his memory alive.” —Jim Kurtz, U.S. Army 1st Cavalry Division 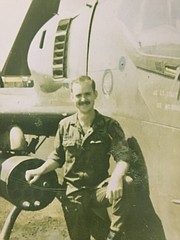 1st Lt. Lawrence Lilly, shown in an undated photo, was shot down over Cambodia in March of 1971 and is one of seven Alexandrians still considered a POW/MIA from the Vietnam War. The Friends of Rocky Versace held a ceremony Nov.15 to add Lilly’s name to the memorial plaza in Del Ray.

As snow blanketed the Captain Rocky Versace Plaza, the newly chiseled name of 1st Lt. Lawrence Lilly was unveiled Nov. 15, bringing to 68 the number of Alexandrians fallen during the Vietnam War and honored with a Gold Star at the city’s Vietnam Veterans Memorial in Del Ray.

“This was a long time coming,” said Jim Kurtz, who served with Lilly in the Army’s 1st Cavalry Division. “On behalf of his comrades, I am so thankful to the City of Alexandria for keeping his memory alive.”

Lilly’s 93-year-old mother, Jeannette Lilly, unveiled the Gold Star tribute to her son on the outdoor plaza. Lilly’s sister, Susan Lilly Harvey, then placed a POW bracelet bearing her brother’s name inside the Capt. Rocky Versace Vietnam Memorial display case, which is a permanent exhibit inside the entrance to the Mount Vernon Recreation Center.

“Larry was a special guy in our platoon,” said Kurtz, who spoke about the circumstances that led to Lilly being shot down over Cambodia in March of 1971. “He was a college graduate who enlisted in the Army and worked his way up. He was respected and loved by everyone who knew him.”

Lilly graduated from Catholic University in 1968 and enlisted in the Army at Alexandria’s recruiting station.

“In 1968, the nation was in turmoil,” Kurtz said. “Yet as the son of Air Force Colonel Bob Lilly, who was part of ‘the Greatest Generation,’ Larry wanted to serve his country as his father did.”

When he was shot down on March 17, 1971, Lilly was a member of Troop A, 1st Squadron, 9th Cavalry, 1st Cavalry Division, flying as co-pilot of a Cobra helicopter gunship on a secret visual-reconnaissance mission over Cambodia.

The incident report states that as the aircraft was near a landing zone, it was hit by enemy fire and forced to the ground deep inside Cambodia in the Snuol District of Kracheh province, near Seang village. The pilot, Capt. David P. Schweitzer, was rescued, but heavy enemy fire forced the rescue helicopter to leave the area before Lilly could be extracted.

Lilly, who was 26 years old, was last seen by U.S. personnel lying on his back with his shirt partially open and blood on his chest and neck.

“He was being fired on by Viet Cong forces,” Kurtz said, “and is considered KIA/BNR, or Killed in Action-Body Not recovered.”

Kevin Rue, a West Point graduate and organizer of the ceremony on behalf of The Friends of Rocky Versace organization, said that the delay in adding Lilly’s name to the memorial was due to a common practice of military families listing an alternate hometown in Department of Defense records.

Lilly was raised in Alexandria, where his mother and sister still reside. But as a “military brat,” his hometown of record at the time of his death was listed as Los Angeles, where his father was stationed at the time. When friends and family members contacted Rue, he moved quickly to seek approval from the city to add a Gold Star and Lilly’s name to the memorial honoring Alexandria’s fallen from the Vietnam War.

“The Lilly family waited more than 47 years to have their son and brother honored here today,” Rue said. “His service and sacrifice will never be forgotten.”