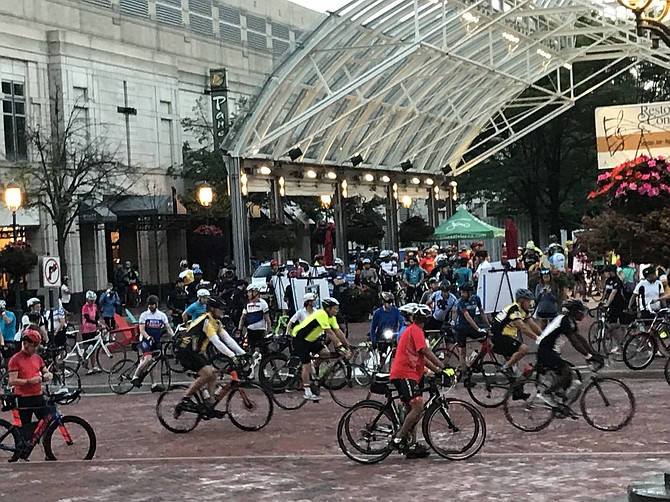 Registered cyclists for the 35th Annual RBC Century await the 6:30 a.m. start call under the lights of the Reston Town Center Pavilion on Sunday, August 26. Photo by Mercia Hobson.

Event organizers reported riders came as far away as California to take part in the event. Registration closed after reaching the stated limit of 1,500 cyclists.

Riders arrived at the start/end location, the Reston Town Center Pavilion, well before 6 a.m. Start times ranged from 6:30 a.m.-10:00 a.m., but all riders competing in the full Century had to leave the Pavilion by 9 a.m. to ensure making it back to Reston by event close of 5 p.m.

Harmoz Akhavan, who works in Herndon, said that he began cycling twenty years ago and continued to do so with his wife, Bita Nakhai. "The best thing about riding is that it's like meditation; you can just zone out, especially in the morning. It's also about teamwork, being part of a group. You have to do your part as a member of the team because you are going to affect everyone around you."