Langley’s Franke a Force at the Net
Votes

Langley’s Franke a Force at the Net 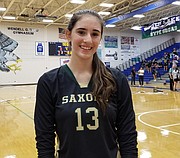 Olivia Franke stepped up to serve early in the fourth set of a recent Liberty District match against South Lakes with a chance to extend Langley’s lead.

Instead, the 6-foot-4 Saxon middle hitter smashed the ball into the back of teammate Kylie Allen’s head, giving a point to the Seahawks.

Franke apologized to Allen before heading to the bench, where she received a ribbing that included a reference to her older sister, former Saxon standout Allison Franke.

“She hasn’t done that since she was a freshman,” Langley head coach Susan Shifflett said. “Her sister used to give her crap about that, so I told her, I’m calling your sister and letting her know what you just did.”

Olivia Franke’s service error provided the Langley volleyball team with a moment of humor during Thursday’s match. Unfortunately for South Lakes, Franke also provided the Saxons with plenty of points.

The Saxons, however, do return the younger Franke, a Wake Forest commit who was a first-team all-state selection as a sophomore. No. 13 is an imposing ball-striker who can help lead Langley while the 2018 team discovers its identity.

“As a freshman, she came in outstanding,” Shifflett said. “In the state finals last year, Elena got her the ball, but Olivia finished it. … She’s a great kid. She’s a great leader, she’s a great player, she’s so pleasant to teach and coach.”

Against South Lakes, Franke helped Langley navigate through a match that Shifflett called “ugly.” After the teams split the first two sets, Franke produced two kills, four blocks and an ace in the third set, giving the Saxons a 25-18 win and control of the match.

“She’s smart,” Shifflett said. “She understands the game, she studies the game. She knows when she has to go, she knows when to ease off. She sees the court, she’s just a really smart volleyball player.”

Opponents can experience joyful moments if able to find success against the talented and towering Saxon.

“It gave me inspiration because if I can block her, then I can probably block anybody,” Scott said when asked how it felt to block a Division I-level player. “She’s a really good hitter. It felt really nice to block her.”

When talking about her role on the team, Franke said the Saxons look to seniors for leadership, but said she hopes to help younger players build confidence.

“I hope to step up, also, as a junior,” Franke said, “just to our freshmen, specifically, so they know they that they are just as important on the court and they can do just as well as any other senior or junior on the court.”

Langley will travel to face Yorktown at 7 p.m. on Thursday, Sept. 27.

“The whole chemistry is totally new and they are still trying to get used to each other,” Shifflett said. “We have communication issues on the court because they’re not used to playing with each other. It’s just one step at a time. They’re trying to live up to last year and they’re a different team. … We’re a good team, but we’re a different team. Once they find their identity and they’re comfortable with the identity, they’ll be fine.”