After nearly 50 years, a light shines on the artist and his works. 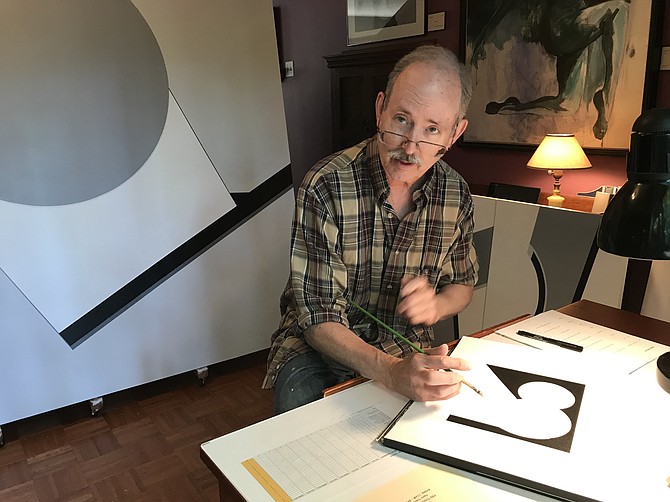 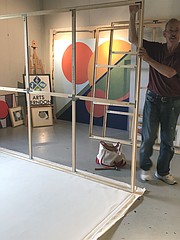 With canvas paintings as large as 78 inches by 96 inches, John Koebert could not transport the works; instead he built the stretcher bars and frames for his works in the gallery of ArtSpace Herndon immediately before his first art show.

John Charles Koebert of Reston said that when he came home from college in the 1970s, and announced to his parents that he had decided to change his life direction and become an art major, he recalled that they said, "You are making a hard 90 degree turn to nowhere. …You'll be living with us for the next fifty years."

After college, Koebert embraced his new career teaching art during the day and honing his artistic skills at night. Techniques evolved and matured. His works changed from representations to "real entities” as he called them. Koebert said he began to incorporate imperfections, such as dried dimples of paint, even bits of hair and dust.

Then in an irony of life, his family called; they needed him, at home, to be the breadwinner.

Koebert said he rolled his massive canvasses into tubes, stacked his pencil sketches and tucked his works away. He entered the corporate world, eventually creating a successful career at Marriott, where he remained until he retired in 2016. Koebert never shared his love of art nor told others he was an artist for nearly half a century, yet creativity and talent simmered within him.

Fast forward, to Sunday, Aug. 11, 2019. At ArtSpace Herndon, a small, multi-arts venue owned and operated by the nonprofit organization Arts Herndon, John Charles Koebert stood at the opening reception and Meet the Artist of his first show, a solo. President of Arts Herndon, Joanna Ormesher, said “John, you are brilliant. …I've hung lots of shows before, but nothing as challenging and beautiful as these. Your life unfolds here. We are very privileged to see your works."

Filling the gallery walls and movable dividers, some of the works were "Little Giants" as Koebert called them. They loomed large. Seventy-eight inches by ninety-six inches, the framed, corporate-size works on canvases, each precise with crisp geometric forms, anchored the gallery painted in their complementary colors or neutral tones. They echoed the works of Budd Hopkins, nationally renowned abstract expressionist artist.

Pencil sketches of women, many graceful nudes, also created by Koebert, hung salon-style with careful consideration to spacing, proportions, frames and compositions. Other drawings and acrylic paintings rested on pedestals.

Koebert did not speak long. A small man, given to precise, careful words, he acknowledged and thanked the crowd. "I feel these are part of me, but I'd like to see them go," said Koebert. His life is now a 40-hour workweek creating new art and space is limited.

The exhibition and sale of paintings and pencil sketches by John Charles Koebert continue through Sept. 7 with consideration for an additional week, according to Ormesher. Works range in price up to $1,500. All pieces are framed and ready for installation. ArtSpace Herndon is located at 750 Center Street, Herndon. For hours and other information, call 703-956-6590.