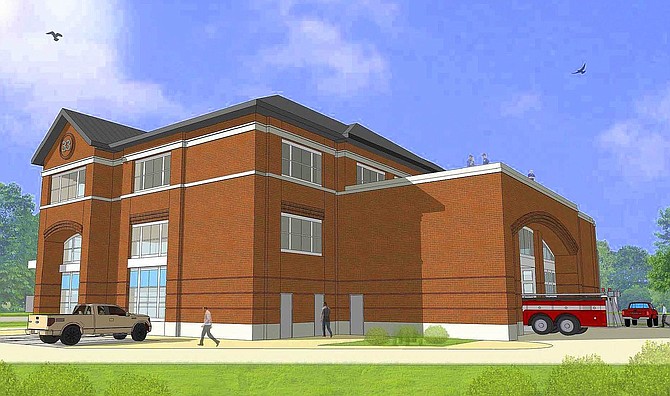 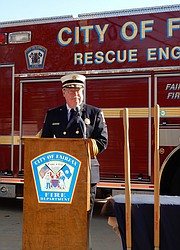 With fanfare, flags and firefighters, the City of Fairfax broke ground for the brand-new Fire Station 33 on the site of the now-demolished former station at 10101 Fairfax Blvd. During the 16 months or so of construction, the fire-and-rescue personnel who worked there will operate out of Station 3 and the fire department’s training facility.

After the presentation of the colors by the Fairfax City Fire Department Honor Guard, Meyer thanked City Council for “its support and foresight with this critical need in the City. This is the first, municipal project the City has done in 14 years. Firefighting is an evolving science, and our firefighters stay on top of all the trends – and this building will position us to take care of the City’s needs for the next 40 years.”

Originally constructed for a single-engine company, the old building’s design no longer met the needs of a modern fire station. It lacked the space to adequately store equipment, and its ready-reserve apparatus had to be housed off-site. Besides rectifying these things, the new facility will increase the Fire Department’s operational readiness and improve safety, health conditions and quality of life for the staff.

LeMay, Erickson, Willcox Architects designed the new station, which is in the same location as the old one, but it will have a slightly larger building footprint. The front will be a bit closer to Fairfax Boulevard, with aprons in both the front and rear of the building.

THE NEW FACILITY will have a secure vestibule and three engine bays, instead of two, like the former station. It will also have a much larger support area, a spacious control room and 25 parking spaces. The second floor will have administrative spaces on the right – three offices and a conference room – and a training area to the left. The third floor will house the dining and kitchen areas, plus bunks for 14 people.

Total project cost is $9.6 million, and the new station is expected to be operational in early 2021. Meyer said it will incorporate gender equity and will also enable the firefighters to keep their dirty gear out of the living spaces, so they won’t be exposed to toxic substances.

Some amenities are also included. “It’s not easy to come back to the fire station after stressful calls, and our firefighters need space to decompress and relax,” explained Meyer. “Overall, this building will help in our retention of and competition for firefighters.”

Besides all that, he added, “A first-class fire station in close proximity to residents allows us to obtain the lowest tax rates possible. We’re all excited to be here, and we thank [everyone attending] and the citizens for all your support for this project.”

O’Neal thanked Meyer, Stalzer, the past and current City Council, former City Manager Bob Sisson and Finance Director David Hodgkins for their “support and guidance” through the whole process which began several years ago. He also recognized the Fire Department’s internal, design-team staff that participated in the building’s needs assessment with the architects.

“We’re very proud and pleased with the design,” said O’Neal. “The new station will be three stories and almost 21,000 square feet, replacing the old, 7,800-square-foot building. Our new facility has incorporated the latest in hot-zone design principles and modern, vehicle-exhaust systems to help limit exposure to carcinogens.

“It will have a state-of-the-art decontamination area, equipment-storage areas, and modern offices and living quarters, including individual bunk rooms to help prevent sleep deprivation,” he continued. “Construction will take approximately 16 months as we move forward, and then we can return here for a ribbon-cutting/ hose-uncoupling ceremony.”

Christopher Kehde, principal with LeMay, Erickson, Willcox Architects – which has designed fire station for more than 30 years – said, “We’re excited to be here today celebrating this important milestone. We’re proud to do our part to serve our first responders who put their lives on the line every day to keep our communities safe.”

He said concepts focusing on the health and wellbeing of the firefighters will be an integral part of the new Station 33. “This has been a positive and amazing process,” said Kehde. “Thanks again to everyone that’s helped us get to this important day, and we look forward to seeing everyone back here at the grand opening.”

Kevin Jackson, with Whitener and Jackson, told attendees, “It brings pride to our hearts that we were chosen as your contractor. Thank you – we won’t let you down.”

SPEAKING LAST was Joe Charley, vice president of the City of Fairfax Professional Firefighters and Paramedics IAFF Local 2702. “Making a career of firefighting is a noble profession,” he said. “But firefighters have a 9-percent higher risk of being diagnosed with cancer – and a 14-percent higher risk of dying from cancer – than the general public.”

So, he said, “Mayor Meyer has been an advocate for cancer-reducing elements in this building – and, for that, we are eternally grateful. This fire station will also be able to deal with new growth.” Then, also thanking O’Neal and Stalzer for their efforts in bringing the project to this point, Charley added, “When management and labor work together, everyone benefits – most of all, the citizens.”