‘How Do You Measure a Year in the Life?’ in Chantilly
Votes

‘How Do You Measure a Year in the Life?’ in Chantilly 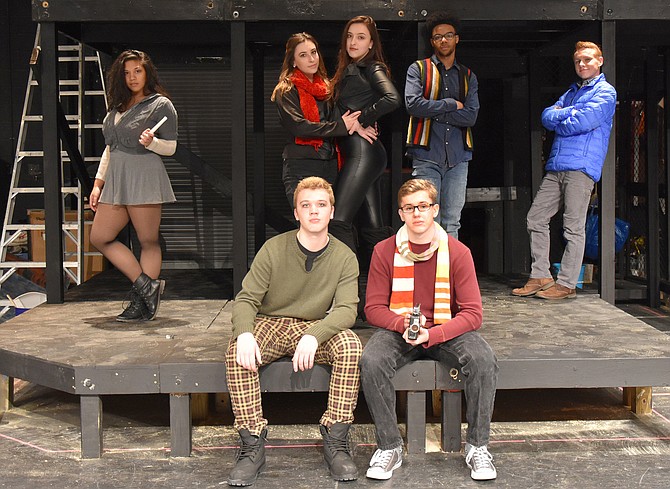 Bringing a message of love and support, Westfield High presents the musical, “Rent.” It’s the high-school version of this show, but it’s still for PG audiences.

The story takes place during the AIDS epidemic in late 1980s-early 1990s New York City. It follows a group of friends struggling to pay their rent while several of them also deal with AIDS. And it shows how they bolster each other’s spirits, giving encouragement and love through the hard times.

The actors are all in Director Rachel Harrington’s most advanced theater classes. “I chose a show with a message I could talk about with the students,” she said. “And ‘Rent’ has a lot to offer about loving people different from you and learning to find joy, even when you’re afraid.”

“I’m really proud of this cast because they’ve taken on very heavy material and brought it to life in a mature way,” she continued. “I told them this show was an important turning point for musical theater, so we really need to do it justice – and they took that and ran with it. It was the first rock opera produced that dealt with such a controversial topic.”

Harrington’s also proud of everything her students have learned about this time period and how they’ve grown through the process. “It’s a reminder of how theater gives us the opportunity to stretch and open our eyes,” she said.

Excited about this show, Harrington said, “We’ve put on a lot of good productions, but I have a really good feeling about this one because of all the great voices and the passion that went into making it. I think audiences are going to love the energy, the music and the overall message of the show that – as one of the songs says – ‘There’s no day but today.’”

Senior Bridgette Carey plays Mimi Marquez, a club dancer with AIDS. “She’s fierce, spunky and sassy and lives each day without regrets, because she knows one day she’ll die,” said Carey. “She can be seductive, in a comedic sense. Roger, who also has AIDS, is her love interest. But she makes a couple bad decisions and can get a little feisty, which causes problems for them.”

Carey said it’s been her dream role for five years. “Ever since I saw the movie, I fell in love with Mimi’s character,” she said. “I liked her mindset of living each day to the fullest. I relate to her fierce and sassy personality and, like her, I’ve been a dancer my whole life.”

Her favorite song is “Out Tonight,” Mimi’s solo. “It’s such a fun number, and I’m able to add my own personality aspects to Mimi’s,” said Carey. “It’s high-energy and upbeat, and she’s singing about going out, dancing and just having fun.”

Stressing that audiences will appreciate the show’s passion, Carey said, “It shows everybody’s friendships and relationships and the support you get from them. And the music will definitely draw people in with its mixture of happy songs, ballads and big production numbers.”

Also thrilled to be acting in “Rent” is junior John Henry Stamper, portraying Roger. “I’ve always loved this show; so when Mrs. Harrington said we were doing it, I was so excited,” said Stamper. “It has 41 songs, and the music is unlike anything else on Broadway and really tells a story.”

He described Roger as a starving musician in his early 20s. “He’s a rock guitarist stricken with AIDS and is struggling with it, both internally and externally,” said Stamper. “He longs for success, but knows his life will be cut short. His soliloquy, ‘One Song Glory,’ is about his desire to write a memorable song that means a lot to him before he dies.”

Roger is roommates with Mark – played by Stamper’s real-life friend, Colin Brown – and is in a complicated, romantic relationship with Mimi. “It’s a blast playing Roger, but also challenging, because of the complex storyline,” said Stamper. “I’ve always wanted to play this character, so it’s fun to fulfill that personal desire. And as one of the eight, main characters, I get to interact with my friends in real life. The challenge is portraying Roger’s back story, struggles and desires correctly through song.”

“Rent” is considered a rock opera because the story is mainly told in song, with very little dialogue. It’s based on the French opera, “La Boheme.” And Stamper’s favorite number is “La Vie Boheme” because it “incorporates the whole cast and is a really high-energy song. The friends are living in the moment and enjoying what they have now.”

Besides the music, he said the audience will like the set design illustrating many, different locations. “They’ll also like the message – live in the moment, enjoy yourself and don’t be afraid to embrace others,” said Stamper. “And with the diversity of personality types, everyone is very relatable.”

Junior Colin Brown plays Mark Cohen, an aspiring filmmaker. “He’s a loner, single and afraid of putting himself out there and getting involved in all the drama and tumult of life,” said Brown. “So he hides behind his camera. He’s secretly in love with his ex, Maureen, who left him for someone else. So that also holds him back. He’s awkward and reserved, but he can bust loose when he’s with his friends, and he’s very loyal to them.”

Brown calls his role both “super-fun and challenging,” and he, too, enjoys acting with many of his best friends offstage. Toughest, he said, are singing high pitches and playing someone so shy, since he’s more outgoing, himself. He especially likes the song, “What You Own,” which he and Stamper perform together. “It’s the show’s big, turning point,” said Brown. “It goes from the depressing start of the second act to the more uplifting and climactic ending.”

He said the characters will appeal to the audience, as will the message to “be yourself, follow your own dreams and live every day like it’s your last.”

Classmate Lauren LeVine portrays Joanne, who’s dating Maureen and is one of the more affluent people in the group. “She’s gone to Harvard, but isn’t part of the preppy life,” said LeVine. “She’s assertive, has some sass and is a little bossy. But she can also let loose and rough it with the rest of the gang. Because she’s so different from them and grew up in a different world, she finds freedom in the artists’ world and in being a friend.”

Furthermore, said LeVine, “Joanne doesn’t have to be perfect around them because they’re not perfect, either. It shows that everyone can be affected by AIDS. She’s gone to Harvard, yet has friends dying of the disease. As Joanne, I get to belt out some songs, and ‘Rent’s interesting because the whole cast collectively drives the story. Through this character, I’ve learned about the AIDS epidemic and how it affected people.”

LeVine’s favorite number is the iconic “Seasons of Love.” She said everyone can relate to it because “it’s about life and love. It’s asking how you measure someone’s life. And the whole ensemble sings some really nice harmonies.”

Although the show’s sad at times, she said it also has humor and excitement. “Its message is that we’re all human beings, and more things connect us than separate us,” said LeVine. “I think this story changed how people thought about the AIDS epidemic. They learned it was about normal people and it wasn’t so distant from them.”

In conjunction with each performance of “Rent,” the Westfield Theatre Boosters are holding a silent auction. All proceeds will benefit the nonprofit, AidsUnited, based in Washington, D.C. It advocates for people living with or affected by HIV/AIDS and helps the organizations serving them. AidsUnited’s public-policy work includes an array of organizations throughout the country working to end AIDS in America.

But the community’s help is needed to make the silent auction a success, so the boosters are asking for donations of items to auction. Business owners may donate something related to their businesses, and individuals may contribute items such as gift cards and homemade crafts. For more information or to make donations, email westfieldtheatreboosters@gmail.com.