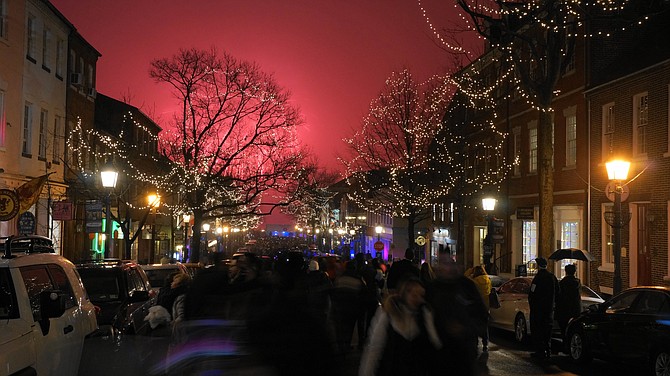 The First Night Alexandria fireworks turned the low cloud cover above the waterfront a fiery shade of red as revelers rang in the New Year at the foot of King Street. Photo by John Bordner/Gazette Packet

“I know it’s a much overused word, but it was an amazing night.” —First Night Alexandria executive director Marilyn Patterson 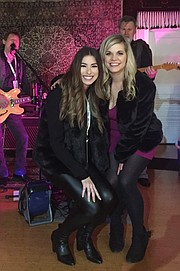 Despite drizzly skies and the threat of heavier rain that never materialized, thousands of revelers descended on Alexandria to ring in the New Year as a midnight fireworks show ushered in 2019 with a “colored clouds” display to conclude the 24th annual First Night Alexandria celebration.

“This is when they decide to go ahead with fireworks when the weather is ‘300 and 1,’ meaning a 300-foot ceiling and one mile visibility,” said John Bordner, who is a retired Air Force pilot. “It wasn’t a traditional fireworks display, but it was actually pretty interesting to see the different colored clouds.”

“I know it’s a much overused word, but it was an amazing night,” said Patterson. “Some of the things we put into place this year seemed to work well. We moved more sales to online and new acts like the Earth, Wind and Fire tribute band and the Shiloh showcase were extremely well received.”

An unexpected addition to the First Night stage at the waterfront was a “pop-up proposal” as Fairfax resident Alan Escudero proposed to girlfriend Shannon Kim.

“When [Escudero] came into the Durant Center to pick up his badge, he mentioned that he was planning to pop the question to his girlfriend that night,” Patterson said. “We decided to make it part of the festivities at the waterfront.”

“We’re still collecting data,” added Patterson. “Whenever you make a major change there are always some hiccups. But even with the dreary skies, people really were out there having a good time and enjoyed the celebration.”