People: How To Build a Choral Powerhouse in Bethesda
Votes

People: How To Build a Choral Powerhouse in Bethesda 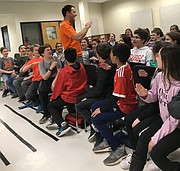 When it came time last month for choir director and Potomac resident Jason McFeaters to choose 40 out of 287 students to sing on the air for local radio station Mix 107.3, he didn’t have to think too much.

“It’s unusual how big and talented a chorus we have,” said McFeaters, North Bethesda Middle School (NBMS) chorus teacher. “We won this contest then had to go to the radio studio to perform, so I pulled 40 names out of a hat.”

Those 40 students, along with their 247 choral counterparts, have the privilege of being part of something that both welcomes everyone and rakes in accolades every year.

“It speaks to the quality of the program that I can take any group of kids knowing they will sound good,” said McFeaters, who also chairs the NBMS music department. “It also attributes to how we do things, and why kids like to be a part of the chorus. A football coach would never pick 40 names out of a hat to determine who would play at a big football game.”

McFeaters’s mass of middle schoolers are also members of a choir larger than other middle school singing groups. NBMS’s chorus represents more than 20 percent of the entire school population, which hovers around 1,150. It is a group that McFeaters himself had grown from 28 to 287 in the 15 years since he first set foot in the local school.

“It’s a massive group,” McFeaters said. “It was 28 kids when I started – only four boys, and the rest girls. It’s funny because the chorus director before me actually chose to leave the school because she didn’t think it was possible to grow the program. But, when I came on board, the kids were pretty hungry. They were ready to get good. So, I inherited that small group, and then recruited. It just grew and grew and grew.”

He thought outside the (voice) box when it came to recruiting. And, then his strategy had a domino effect.

“Students used to run the mile every Friday in PE class, so I would go and run it with them every week,” he said. “As we’d be running, I would tell them how singing was both cool and fun. It was all about getting my name and face out there so that I’d be more approachable. I also went on all the school ski trips to ski with the students. I chaperoned everything so that I could really connect with them.”

So, by the end of these runs – and trips – NBMS students had plenty of compelling reasons to join their school’s growing chorus.

“THE CLASS doesn’t require any previous singing experience, so we end up having kids of all these various different backgrounds and skill levels,” McFeaters said. “A lot of kids sign up because their friends are in it. Then, they get to be a part of something that’s the best. From the beginning, kids would join in clusters. Then, we were winning contests, so kids joined for that. Then, we added in more field trips, and more came on board for that.”

Chorus is an elective course taken every day of the school week, and is a class open to 6th, 7th, and 8th graders alike.

“It’s a class, every day, five days a week,” McFeaters said. “It’s so big it ends up being five classes split into groups of 60. When we all practice together, we have to be in the cafeteria or the gym.”

NBMS eighth grader Matthew Ashman has been in the school chorus since sixth grade, and he couldn’t imagine his middle school experience without it.

“Chorus has made every year of middle school better,” Matthew said. “It’s the one part of every day that I really look forward to. Mr. McFeaters teaches differently from my other teachers. There’s something about the way he leads us that makes Chorus a really good class.”

Although Matthew has always had a deep interest in music, many of his friends have joined Chorus simply because it is a fun way to spend part of the school day.

“I love the performances most of all, and it’s awesome because a lot of my friends are in chorus, even though not many of them pursue musical things outside of school,” Matthew said. “Still, we all very much enjoy chorus together. I already do a lot with music – guitar, piano, drums, so, I will say, I’m not sure if I would have stuck with Chorus if Mr. McFeaters hadn’t been the teacher.”

EVERY YEAR, the NBMS chorus has two major in-school performances, along with a handful of local and state competitions.

Get a group of nearly 300 adolescents together, and the odds of harmonious communication are pretty small. McFeaters, however, isn’t the least bit beleaguered in working with middle schoolers.

“I can honestly say that my passion for music, and these kids, has just continued to grow over the years,” he said. “I love what I do. They come in at sixth grade as babies, and then leave ready for high school as little adults.”

By the time McFeaters himself – a Baltimore native – was in middle school, he had already realized that music would forever define his life.

“I was in chorus and I played saxophone in the school band,” he said. “I came from a town that wasn’t very affluent. Not a lot of kids from my school went to college. When it started to show that I was a talented musician, I stuck out like a sore thumb. I quickly realized that it was my ticket. I got a music scholarship for college, and I haven’t looked back. I always knew that music was what I wanted to do.”

After graduating from Johns Hopkins University’s Peabody Conservatory with a Bachelor’s Degree in Music Education, McFeaters went on to earn his Master’s Degree in Saxophone Performance from the University of Michigan.

From there, yet before turning NBMS’s chorus into an award-winning group, McFeaters taught college students at the University of Windsor in Canada.

No one can teach the art of performance better than a performer, and McFeaters fits that bill. In addition to teaching, he plays saxophone professionally. So, when he first got to NBMS and met that original 28-student chorus, he immediately recognized their drive and desire for success.

“There is a rating standard for Maryland school choruses,” McFeaters said. “The best rating a chorus can get is a ‘1,’ for superior. When I came in at North Bethesda, I saw that they had been rated as a ‘2’ for a long time. Those 28 kids in chorus my first year, they wanted to get that ‘1.’ They were hungry. They did it. That made me realize, ‘I can do anything with these kids.’”

Fifteen years, three children, and plenty of professional musical endeavors later, McFeaters is happy right where he — and the NBMS chorus — is.

“I can’t even think of any particular goals we are striving for because we are already so great now,” McFeaters said. “It’s a big, high-quality thing, I’m just in La La Land and enjoying the ride. I’ll be [at NBMS] for a long time. I’ve had lots of opportunities to go other places, but I’m not going anywhere.”