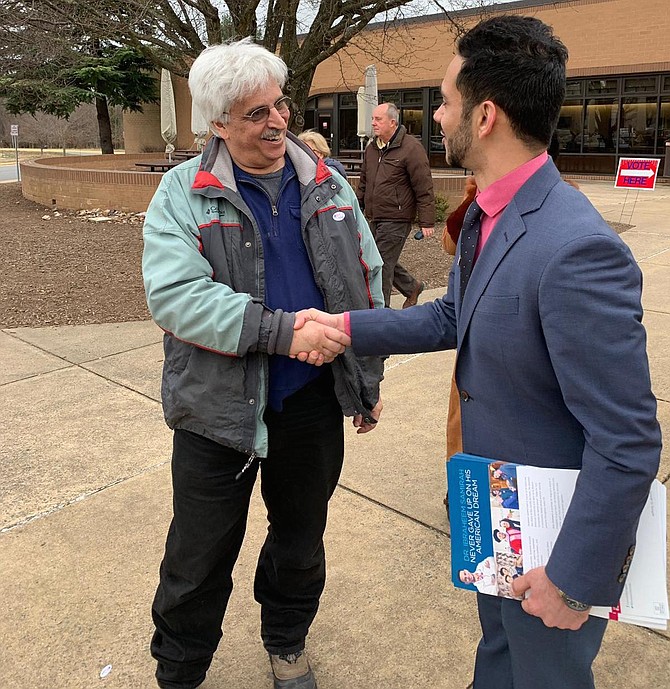 "The turnout today has been incredible – a testament to the excitement surrounding this election and to the hard work of the Democratic Party officials who organized this primary to ensure everyone in the 86th District has a say in who their nominee will be.” – Candidate Ibraheem Samirah, Herndon. Samirah won the Democratic nomination for the VA House 86 District race later that evening. Photo contributed by Samirah for Delegate campaign 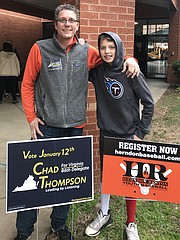 Candidate Chad Thompson, Oak Hill stands with his son, Tyler, 12 in front of Dranesville ES, one of two polling places for the Democratic caucus. Thompson said, “Congratulations Ibraheem Samirah on Democratic Nomination for the 86th District. The turnout yesterday was extraordinary, and it shows the power of the Democratic party in Northern Virginia. I pledge my support for him (Dr. Samirah) in the upcoming special election on Feb. 19.” 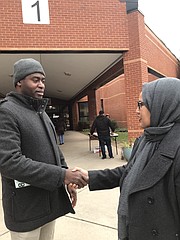 "To be part of the community, you have to participate.” – Candidate Kofi Annan, Herndon 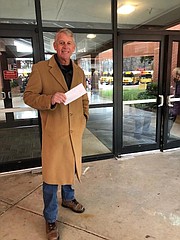 "Very excited to cast my vote in today’s election where the Democrats have several very qualified candidates willing to serve the 86th District.” – Candidate Mike O'Reilly, Town of Herndon 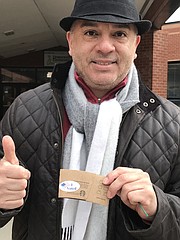 "This is amazing. So many people here. I am inspired by the commitment to our process. Democrats are committed to selecting a representative." – Herndon Town Councilmember Cesar del Aguila, Town of Herndon

Minutes into the second hour of the six-hour Unassembled Democratic Caucus for Virginia House District 86, held Jan. 12, 2019, a woman dropped her ballot into the ballot box at Dranesville Elementary School in Herndon, one of the two polling places in the district. The official clicked her tally counter.

"What number am I?" the voter asked the official.

"Yours is the 242nd ballot,” the polling official said.

For registered voters in the VA District 86 who self-identified as a Democrat and pledged to support the eventual nominee, less than five hours remained to cast their ballots at either of the two polling places, Dranesville E.S. or Franklin Middle School in Chantilly.

Outside, voters and candidates spoke out about the apparent high voter turnout, why they participated and shared their viewpoints about the firehouse primary for VA House District 86.

Ibraheem Samirah won the four-way primary with 733 votes. A dentist who commutes daily from Herndon to D.C., Samirah writes on his campaign website that he is running for Virginia Delegate, "to give back—by helping families stay healthy, with more opportunities to succeed, and more time to spend together.” Samirah states transportation, education, jobs and economy, healthcare, drug policy reform and protecting the environment are his priorities. “As a Delegate, I will fight to make our commutes better by decreasing travel times, lowering toll costs, expanding our public transportation systems, and encouraging public partnerships with the private sector to make sure that all Northern Virginians benefit from our area’s rapid development."