‘Rags to Riches’ in Alexandria
Votes

‘Rags to Riches’ in Alexandria 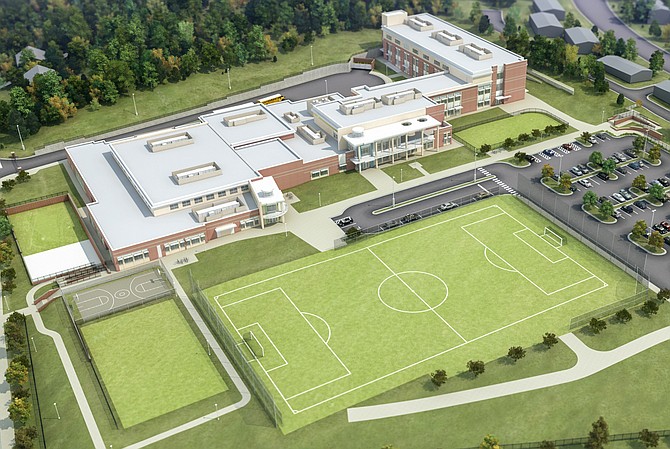 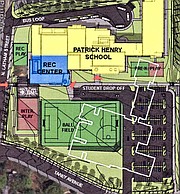 The new school (yellow) and rec center (blue) provides nearly 156,000 square feet of space, two-thirds more than the old facilities (white outline). To streamline costs, the school division kept students in place at the old facility during construction, rather than build or repurpose a temporary “swing space” elsewhere. The site provided enough space for this, but only just: the new building came to within just eight feet of the old, a “logistical nightmare,” said Paul May, the schools’ project manager. Most other school sites slated for rebuilds are too small for students to stay in place. The old Patrick Henry facilities remain, but are scheduled for demolition by fall, to make room for a turf field and additional parking.

A “black box” theater provides flexible performing arts space, such as for Patrick Henry’s full-time dance program. The theater is one of the dual facilities’ shared spaces, open for rec center use after school hours. The school’s “cafetorium” — part cafeteria, part auditorium — also provides a stage with performance lighting and sound, and space to seat over 300.

The rec center’s “flex court” provides an indoor track and court space for basketball, badminton, pickleball and volleyball. The school’s adjacent gymnasium provides additional court space and a rock-climbing wall. The two gyms are among the dual facilities’ shared spaces, open for each other’s use during appropriate hours.

The second floor library and media center, with “breakout” rooms. 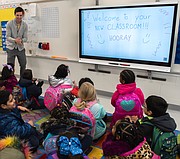 First graders are welcomed to their new classroom.

The conjoining facilities, a joint project between the public school division and city government, begun in FY 2014, opened almost on time, despite a brief rain delay, and on budget. The project cost some $62 million — $52 million for the school, $10 million for the rec center.

By building the facilities together, the schools and city saved on certain costs, including design, construction, and shared HVAC infrastructure.

The new school can accommodate 900 students by design, about a one-quarter increase on the old school’s capacity. The new campus will remain under- or fully utilized through FY 2023. But thereafter, student enrollment will increasingly exceed the design capacity, reaching 111 percent utilization by FY 2029, according to recent enrollment forecasts.