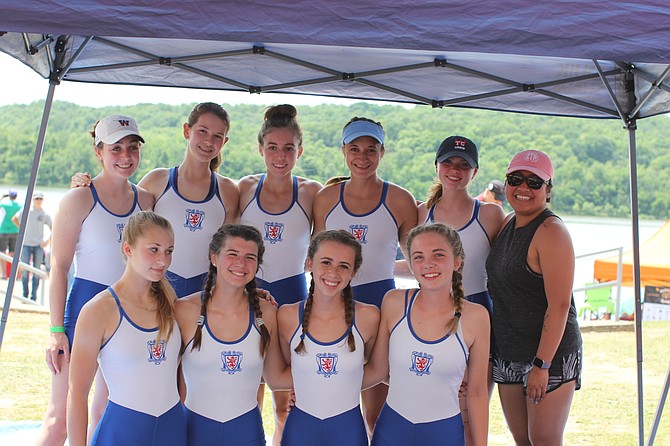 The women’s lightweight eight and the men’s junior four advanced to the finals at Stotesbury, where both boats came in fifth overall in their respective races, in a regatta that drew 975 boats and more than 5,000 competitors from around the country.

The Stotesbury Cup Regatta is held just upriver from Philadelphia’s famous boathouse row, and draws crew teams from around the country, who set up hundreds of tents along the historic river and mingle with other rowers.

The Schuylkill River is notoriously difficult, known for a quick current that primarily affects lanes three, four and five. As luck would have it, the T.C. Williams boats consistently drew the far lanes.

The two championships were the final races for men’s lightweight coxswain, senior Clare Williams. “Overall, this season and rowing have been really meaningful to me. The guys I row with inspire me every day to mentally and physically push myself,” she said. “There’s nothing more worthwhile than racing with others who enjoy the sport.”