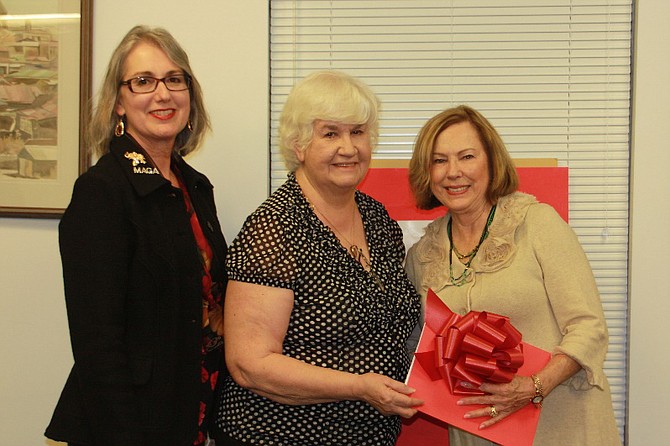 Lisa Henty, assistant director, Alexandria’s Office of Management and Budget, was the guest speaker at the Commonwealth Republican Women’s Club (CRWC) February meeting. Henty used a PowerPoint presentation to summarize the highlights of the proposed City Fiscal Year 2020 Budget currently being shared with the community for comments in advance of being finalized in May. CRWC members had submitted written questions in advance.

CRWC President Eileen Brackens also reported that the club’s efforts to raise funds for the scholarship and internship programs of Pathfinder, Inc. had reached over $2,200. The funds were raised by members of CRWC and the Alexandria Republican City Committee (ARCC) to honor the memory of Loree Gunn, who had been active in Alexandria’s Republican circles. Brackens presented the funds collected to Jody Rushton, president of the National Federation of Republican Women (NFRW), sponsor of the non-profit Pathfinder, Inc.

ARCC (at www.alexgop.org ) is the local branch of the national Republican Party. CRWC ( www.alexandriacrwc.org ) is the Alexandria chapter of the National Federation of Republican Women (www.nfrw.org ). Men may join CRWC as associate members. Information on the Pathfinder Inc. scholarships and internships is located at http://www.nfrw.org/pathfinder.