Revisiting the Fifties in Vienna
Votes 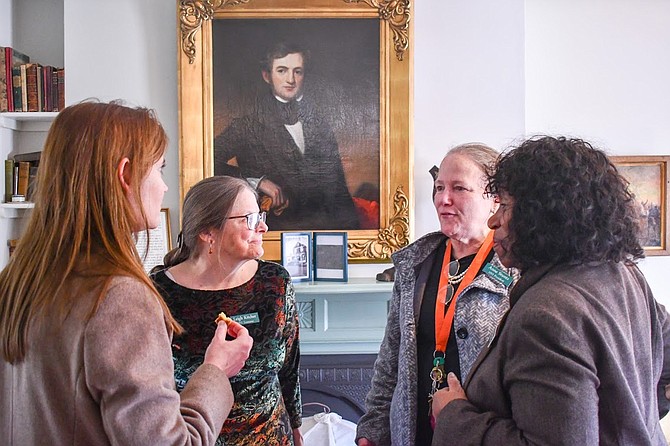 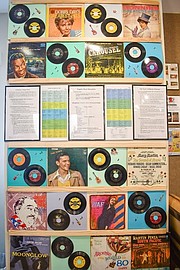 A wall of 45s and records explains how technology changed music and popular singles of the day. 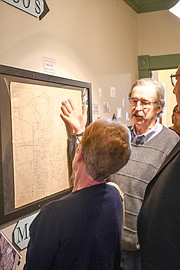 John Vrana, historian of Historic Vienna Inc., chats with attendees about the growth of Vienna suburbs. 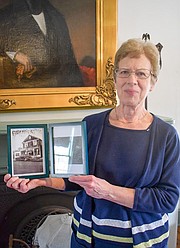 Alice Morgan Brady holds a photo and newspaper excerpt from 1954 of Curly’s, a clothing store for men, in Vienna. Her family owned the store in the 50s. The building later became Once Upon A Time and is now presently Cocoa Vienna.

As the grand opening party for the Freeman Store and Museum’s new exhibits began, tunes such as Duke Ellington played in the exhibit room while attendees’ conversations started with “Oh I remember when…”. Even down to the fruity punch at the party, which was made from a recipe out of a copy of Better Homes and Gardens cookbook from the exhibit, it tasted like the 50s. Over the course of two months, the board and members of Historic Vienna Inc. readied the exhibit room of the Freeman Store and Museum for its new exhibit: Vienna and the 1950s.

“The 1950’s were a critical point for the town of Vienna,” said Leigh Kitcher, Vice President of Historic Vienna Inc. “It turned from a rural community to a suburb. The town grew enormously. It grew tenfold in that one decade.” Vienna’s population in 1950 hovered around just barley 2,000 people. However, by the 60s, the town had more than 11,000 residents. “The 50s were a period of great social change, not just for Vienna, but for the country as a whole. You had Brown vs. the Board of Education, McCarthyism, the construction of highways, and especially the emergence of the teenager. They had cars!” said Kitcher.

“In 1938, the country passed a law saying that no one under the age of 16 was to work. Previously, children were a major part of the labor force. So they had the freedom and opportunity to go to high school for the first time. High school enrollment blossomed and because there were busses, they could actually get rural kids to the high schools. This then created a meeting place for kids, which created a whole new culture.” Think sock hops and Sadie Hawkins.

THROUGHOUT THE EXHIBIT, people excitedly pointed out where their present day homes were on old maps of Vienna and enjoyed reminiscing about simpler times while viewing informational sections pertaining to fashion, music, toys, and the growth of our nation.

Downstairs in the hallway, a new installment of the Women’s Suffrage movement promoted the League of Women Voters.

“Our League of the Fairfax Area was founded in 1948, but the original League was formed in 1920,” said Beth Tudan, Executive Director of the League of Women Voters of the Fairfax Area. “As a league we hold candidate forums, voter services, registration and education. In Fairfax, we’re working on the voter registration drive for high schools. … We asked our board if we could go in and educate the students. The program started about two years ago with 1,600 students and now it approximately has about 5,000,” said Tudan. The League of Women Voters is extensive: there are six local leagues in the National Capital Area league, who then feed into the Virginia league and then onto the National league. “We also write studies,” said Tudan. “In Fairfax we have about ten discussion groups, such as Vienna, Oakton, Reston and McLean, that focus on a study we’ve done and then we discuss it. This past month we focused on election security and cybersecurity affecting elections.” The League is both a 501(c)(3) and 501(c)(4), both considered non-profits, but the main difference is that you cannot endorse candidates or lobbying through a 501(c)(3), only through a 501(c)(4). “We have two different sets of boards. One is more focused on voter registration and education while the other is for advocacy and lobbying,” said Tudan.

THE LEAGUE is also quite excited that the 100th anniversary for women’s right to vote is coming up next year in 2020. “It’s fabulous. Carrie Chapman Catt and other suffragists started this league after we won the right to vote. Instead of just accepting the win, they went on and created this League to help educate women about who and what were on ballots, while also never endorsing candidates. To this day we’ve kept with that,” said Tudan. “I think we look pretty good for 100!”

Visitors can view both exhibits on at the Freeman Store and Museum on Wednesday-Sunday, from 12-4 p.m. 131 Church St NE, Vienna, Va.