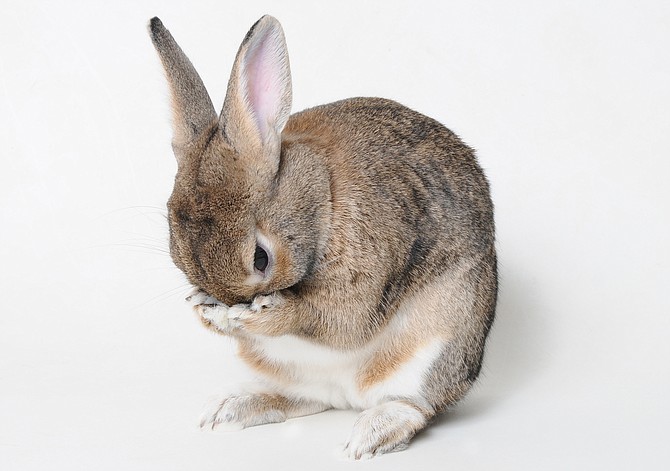 Sean shows off his personality for the camera. Photo by Alison Lane Photography

The challenge: Capture the stories of each dog, cat, rabbit and any other animal at the Animal Welfare League of Alexandria (AWLA).

The solution: A corps of professionally trained photographers volunteering their time to take individualized portraits of each animal in need.

Luckily for the AWLA, several professional photographers have answered the call, stopping by weekly with gear in tow to capture photographs of the shelter’s latest residents. Each has her own style and approach, but all share a goal: to provide a positive experience for each animal and create photographs that put them in their best light as they prepare for adoption. Along with their work in the shelter, the volunteer photographers also capture memorable moments at AWLA-related events, such as the Fun Dog Show, held around St. Patrick’s Day, and the annual Howl-O-Ween costume competition.

Photographer Alison Satinoff occasionally spices up her photo portrait sessions with props — flowers, bowties for the animals to wear and beads and ornaments to strew around kittens and rabbits. But it’s a session with a group of eight pet rats she recalls most vividly. “We placed them in a Barbie doll bathtub, about three at a time,” she said. “Fortunately, the rats’ foster caregiver was there to help, and the rats cooperated well. It actually looked super cute.”

These portraits, which are featured on the shelter website and on social media as well as in other shelter materials, require the assistance of specially trained shelter volunteers, who bring animals one by one into the shelter’s community room, where the photographers have set up professional lighting equipment. Each animal is posed in front of a 12-foot-tall white board, which can be intimidating until the photographer starts her song and dance. “I’ll make weird noises or hold a hot dog over the camera to get their attention,” says photographer Sabrina Moore, owner of Dirty Paw Photography, who has offered her services to the shelter for the past four years.

Photographer Alison DeSilva, owner of DeSilva Studios, also uses treats to ignite action shots, sometimes throwing a hot dog into the air to get a dog to jump up and grab it. But the cats, she said, can be a bit more challenging to coax, and sometimes the biggest challenge is getting them to stay on the backdrop long enough to get a photo.

Each photographer brings her own individual style as well as expertise to her sessions. Moore will shoot animals in front of colored and patterned backdrops to help the shelter denote animals who have met certain milestones. Photographer Shelley Castle and DeSilva excel at photo sessions outdoors as well as inside, when the shelter is telling a specific story or trying to capture a special moment. And with her use of creative props, Satinoff has captured some of the shelter’s most unique shots, used not only to highlight an adoptable animal but in other materials and media to show how fun and engaging the shelter can be.

Shooting with shelter animals is much harder than photographing people’s pets, says Castle, who helped develop the AWLA’s photography program and has captured hundreds of the shelter’s animals with her camera over the years. Castle, who grew up on a Virginia horse farm and now runs Shelley Castle Photography, which specializes in outdoor pet photography, says understanding animal behavior is critical to making them feel secure in a photo shoot. “The most important thing about photography is patience. I have to wait for animals who are scared to regain their composure and get comfortable … And then I might bark or whistle to get them to stop and look at me.” But the photographers also understand that posed photos are not ideal for all animals and have captured turtles, shy cats and even fish in their own enclosures and tanks as well.

The photography team says the rewards outweigh the struggle of capturing the sometimes-fidgety animals in action. Satinoff recalls a day when she stopped by the shelter and was asked by a member of the public if she was one of the shelter’s photographers. The woman then proceeded to show her a picture of the dog she had adopted on seeing his photograph — and it was one that Satinoff had shot. “It makes it all worthwhile because that’s why I’m there,” she said.

“Some of the animals you fall in love with so much,” Castle said. “I feel the most rewarded when I can help a cat or dog who’s completely scared by being part of their learning experience for adoption. If I can stay calm and teach them that we’re here to help, it can prepare them for the kindness of a future family.”

You don’t have to be a professional photographer for your pet to be famous. Enter the Animal Welfare League of Alexandria’s 2020 photo calendar contest in June to make your pet a star and win fun prizes, including a photo session with an AWLA pet photographer. Learn more at AlexandriaAnimals.org/Calendar. The AWLA’s skilled group of volunteer photographers offers these tips for capturing the best photographs of your pet: