Plenty of juice, fruit and enthusiasm. 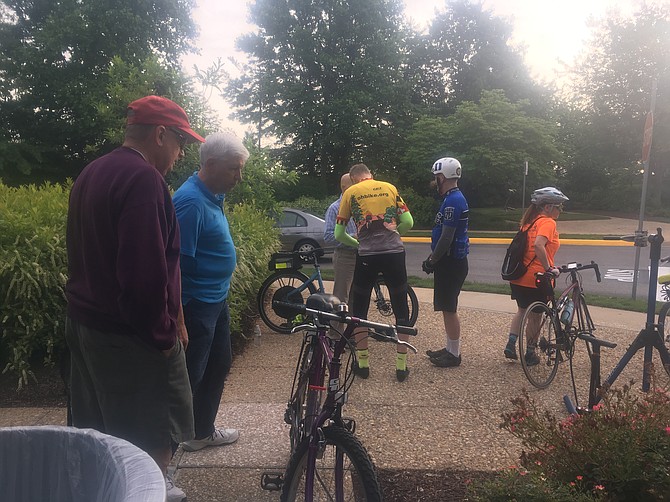 Bike to Work Day is a hit in Kingstowne Photo by Mike Salmon.

School nurse Laura Lux pulled into the Bike to Work Pit Stop in Walker Lane near Kingstowne with a mission in mind, and that was to set a good, 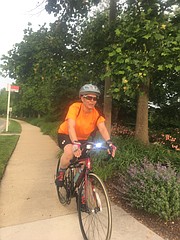 healthy example to her students at nearby Lane and Island Creek Elementary Schools. Biking to work is good exercise, and she came from her home in Burke.

Lux was one of many cyclists that stopped at the pit stop that was set up in a gazebo along Walker Lane on May 17, as it has for the last several years. The pit stop was sponsored by Metro Park, Calibre, the Transportation Association of Greater Springfield, Springfield Hilton and the Greater Springfield Chamber of Commerce. There were 60 riders signed up for that pit stop.

Jen Brown was the representative on hand for the Fairfax Alliance for Better Bicycling. Bike to Work Day, which is hosted by Commuter Connections and the Washington Area Bicyclist Association, “raises the awareness,” of biking in the metropolitan area, she said.

Commuter Connections Director Nicholas Ramfos has been a driving force behind Bike To Work Day for years. Their studies show that 28 percent of new riders will continue to bike to work more often after they take part in a Bike To Work Day. “That’s really the whole idea,” Ramfos said.

This year there were about 18,000 riders which was up about 1,000 riders from last year, Ramfos said. No rain made it an attractive event. “It went well,” he said.

The pit stop in Kingstowne had coffee, juice and fruit for the trip to work for many.

near the gazebo. Joan Clark was at the pit stop representing TAGS and the Lee District Supervisor’s office. “The idea is to get as many of our roads striped as it is in the master bike plan,” she said.

Another riding venue is planned near the railroad tracks up to the Franconia-Springfield Metro Station, called the “Cinderbed Bikeway.” Brown highlighted that project to riders.

“Fairfax County is putting in a trail along the train tracks,” she said.

When it came time to hand out the famous Bike to Work tee shirts, part of this annual event that many look forward to, the riders who had signed up through the WMATA website left empty handed. Somehow, the shirts did not get to the pit stop organizers, but they were hoping to get the shirts to the riders later.