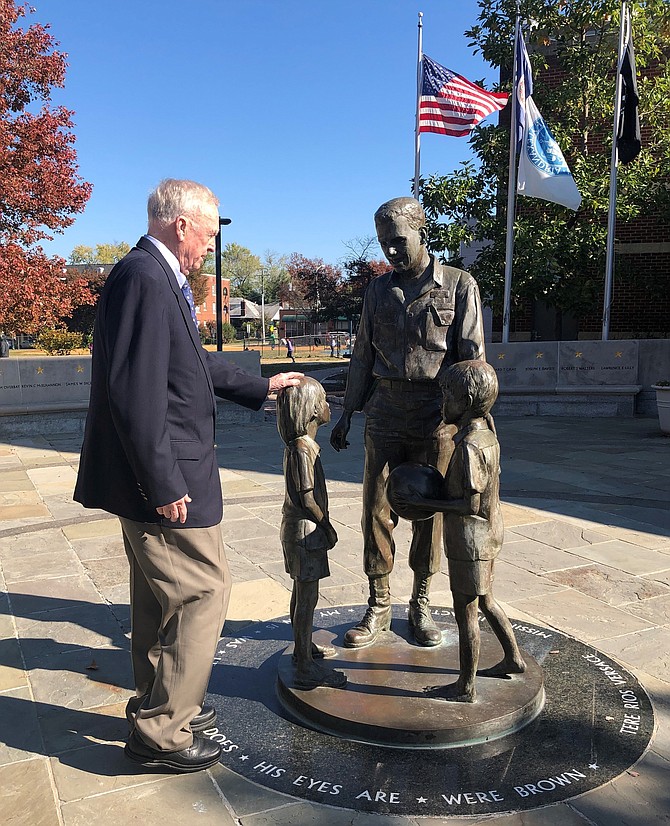 USN Capt. Eugene “Red” McDaniel (ret.), pays his respects at the Captain Rocky Versace Plaza and Vietnam Veterans Memorial Nov. 6 in Del Ray. McDaniel spent six years as a POW at the “Hanoi Hilton” during the Vietnam War. A Veterans Day ceremony will be held Nov. 11 at 1 p.m. at the Rocky Versace Plaza. Photo by Jeanne Theismann.

The Friends of Rocky Versace, in partnership with the City of Alexandria, will host the 18th Annual Veterans Day Ceremony on Monday, Nov. 11 from 1-2 p.m. at the Mount Vernon Recreation Center.

The one-hour, indoor ceremony will honor the 68 Alexandrians who died during the Vietnam War and all veterans of the U.S. Armed Forces. The ceremony will include the reading of the 68 names engraved in the Captain Rocky Versace Plaza and Vietnam Veterans Memorial, recognition of Gold Star families in attendance, a tribute to Medal of Honor recipient Captain Humbert Roque “Rocky” Versace, the presentation of Vietnam Veteran lapel pins to Vietnam-period veterans, a wreath laying in honor of Captain Versace and the sounding of Taps.

Musical performances include the U.S. Army’s Historical Trumpets and Flutes of The Old Guard’s Fife and Drum Corps, and the National Anthem and “God Bless America,” performed by the Alexandria Harmonizers.

Captain Rocky Versace Plaza and the Vietnam Veterans Memorial is located in front of the Mount Vernon Recreation Center, 2701 Commonwealth Ave., and was dedicated with support from Friends of Rocky Versace. Versace was an Alexandrian and POW/MIA posthumous Medal of Honor recipient, Ranger Hall of Fame inductee, Distinguished Member of the Special Forces Regiment and Distinguished Member of The Old Guard Regiment.

The event is free and open to the public.