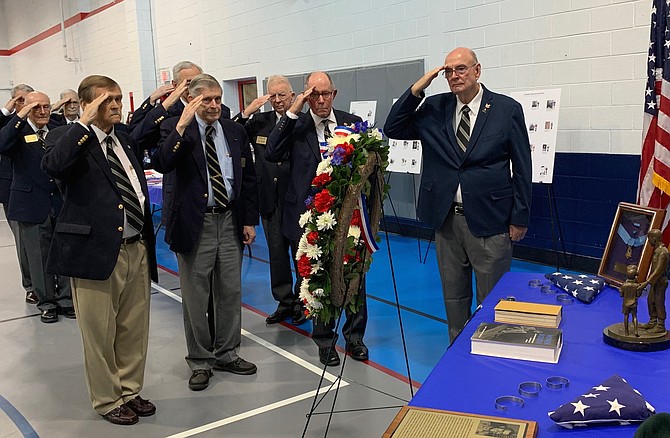 Members of the West Point Class of 1959 salute after presenting a wreath in memory of classmate and Medal of Honor recipient Rocky Versace at the Veterans Day Ceremony Nov. 11 at the Mount Vernon Recreation Center. Photo by Janet Barnett/Gazette Packet 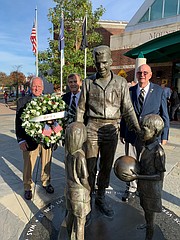 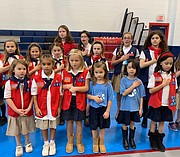 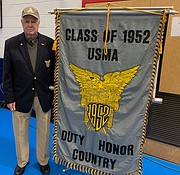 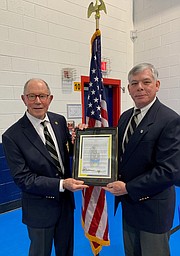 U.S. Army Col. Kevin Rue (ret), right, is presented with a certificate from Col. Robert Weekley (ret) recognizing him as an honorary member of the West Point Class of 1959, the class of Medal of Honor recipient Rocky Versace. Rue has been an advocate for the city’s Vietnam Memorial Plaza, which is named for Versace.

The Alexandria Harmonizers perform the Armed Forces Medley at the Veterans Day Ceremony Nov. 11 at the Mount Vernon Recreation Center.

It was the war to end all wars. After four years of fighting, hostilities formally ended between the Allies and Germany at the “11th hour of the 11th day of the 11th month” in 1918. On Nov. 11, the Friends of Rocky Versace and the City of Alexandria commemorated the 101st anniversary of the armistice to end World War I with a Veterans Day ceremony at the Mount Vernon Recreation Center in Del Ray.

“This is an opportunity to honor the service and sacrifice of local veterans,” said retired Army veteran Kevin Rue, who coordinates the event on behalf of the Friends of Rocky Versace organization.

The ceremony included a reading of the 68 names of Alexandrians who were killed or reported missing in action during the Vietnam War. Those names are inscribed in the Captain Rocky Versace Plaza and Vietnam Veterans Memorial outside the recreation center.

Participating in the ceremony were the T.C. Williams High School JROTC and St. Rita American Heritage Girls Troop 1381, who opened the ceremony with the Pledge of Allegiance. The Historical Trumpets and Flutes of the United States Army Old Guard Fife and Drum Corps performed musical interludes for the more than 200 attendees of the program.

A special addition to this year’s ceremony were members of the Alexandria Harmonizers, who performed The Star Spangled Banner, God Bless America and the Armed Forces Medley in a salute to all branches of the military. Stephen Tracy of Bugles Across America offered Taps as the ceremony concluded.

Special tribute was paid to Humbert “Rocky” Versace, a posthumous Medal of Honor recipient, by his 1959 West Point classmates, who placed a wreath honoring all those who have served. Versace grew up in Alexandria with plans to enter the seminary following his military service in Vietnam. Less than two weeks before the end of his tour, on Oct. 29, 1963, Versace was taken captive in the Mekong Delta. He remains missing in action.