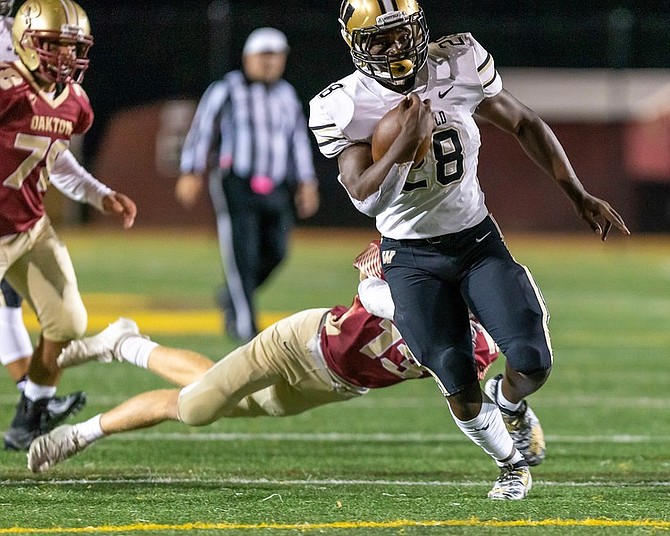 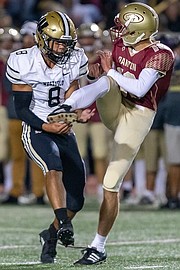 Noah Kim #10 looks down the field for a Westfield receiver. 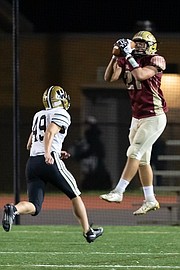 Marvin Coon Jr #21 catches this touchdown for Oakton's only score.

In the first quarter, Westfield took a 7-0 lead when Mikal Legall rushed for a 4-yard touchdown with 9:33. Then Jalen Vines would scoop up an Oakton fumble and burst to the end zone, just 18 seconds later. Westfield would sack Oakton in the end zone and the score was now 16-0. On the ensuing kickoff from Oakton, Westfield’s E.T. Bushra would take the kickoff 70 yards in for a Westfield score the lead growing to 23-0, with still 8:06 to play in the opening quarter. Nearly 4 minutes later Westfield was in the end zone again when Avery Howard took pass from Noah Kim for a 15-yard TD reception. Max Ahiakpo would block a punt by Oakton and teammate Caleb Wheatland scooped it up in the end zone for another Westfield score, the lead now 37-0 with 45 second to play in the opening quarter.

In the 2nd quarter Westfield’s Mikal Legall would run in for a score from 31 yard out, the lead now 45-0.

In the 3rd quarter Eli Soto’s 27-yard touchdown reception would cap the Bulldogs scoring for the game, scoring 51 points.

The Cougars, however, would not be shut out. They would score later in the quarter, when Marvin Coon Jr scored the only points of the game on the board for Oakton with a touchdown reception.