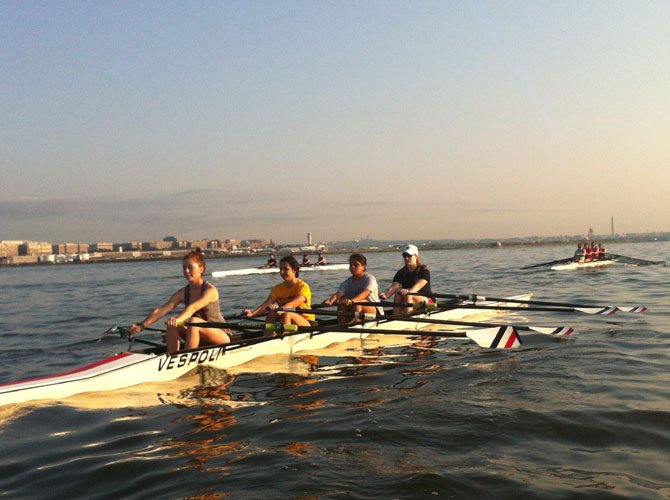 <cl>The quads line up for their 500 sprint to show off their sculling skills at the Blue Plains Sprints on Aug. 2. Photo Contributed

After an intense competition that saw the lead change several times, the Alexandria crew coaches pulled off a last-minute, one second defeat of their students at the Aug. 2 Blue Plains Sprints in front of the Dee Campbell boathouse. This competition was the final race of the Sprints, a series of rowing competitions on the Potomac Waterfront that mark the end of summer crew season in Alexandria.

The race between the coaches and students was a much-anticipated contest, following on fierce competitions in the two prior years in which the coaches took the title in 2013 and the students did so in 2012.

Three boats, two filled with coaches and one with students, competed in the final event, with the Coaches’ A Boat clocking a time of 1 minute 10 seconds, followed closely by the students at 1 minute 11 seconds and the Coaches’ B boat at 1 minute 12 seconds. The victorious Coaches’ A boat was coxed by Allie Zickar, a former TC rower and current student at Hobart and William Smith College who returned to Alexandria to coach this summer. The students’ boat was coxed by TC Williams alum Brian Comey, and TC alum Spenser Gillian was the coxswain for the Coaches’ B boat.

Almost 100 adult and student rowers and coxswains competed in this year’s contest. Windy conditions forced the cancellation of the single scull events, although all others proceeded. Parents, friends and supporters lined the banks of the Potomac and filled the dock in front of the boathouse to watch the races and cheer on the competitors. Athletes were grouped by age and skill level, with novices squaring off against novices and more experienced rowers doing the same.

There were 11 races in all, each about 500 meters in length, and each featuring rowers competing in double sculls, quads, coxed fours, or eights. The purpose of the event was to provide the rowers with a chance to show off the skills they acquired this summer. But, of course, there was another purpose as well — to give the rowers a chance to take on their coaches in the final race of the day. Former coach and rowing legend Steve Weir officiated the events and clocked the times.

“The final showdown this year was exciting and very hard-fought,” said Lexye Hearding, the director of Alexandria Summer Crew. She noted that all of the coaches are former high school rowers, some of whom are still competing in the collegiate ranks. “I did hear a rumor that the coaches A boat may have brought in a ringer, a collegiate rower who gave them the edge in the competition. ”

Hearding noted that while the final race often gets much of the attention, “all of the rowers and coaches did an outstanding job this summer and here at Blue Plains Sprints. I think the adult rowers and the youth novices made great strides in their skills this summer and will hopefully return to row with Alexandria Community Rowing club for adults and Fall crew for the students.”

Hearding noted that most of the coaches took part in Summer Crew when they were younger.

“It’s always been a great way for young people to get started in the sport,” she said. “We had a lot of talented athletes out there this summer, and I’m sure we’ll see many of them back out on the water again soon.”

Students who are interested in taking part in the Alexandria crew tradition can learn more about the opportunities at www.tcwcrew.org.