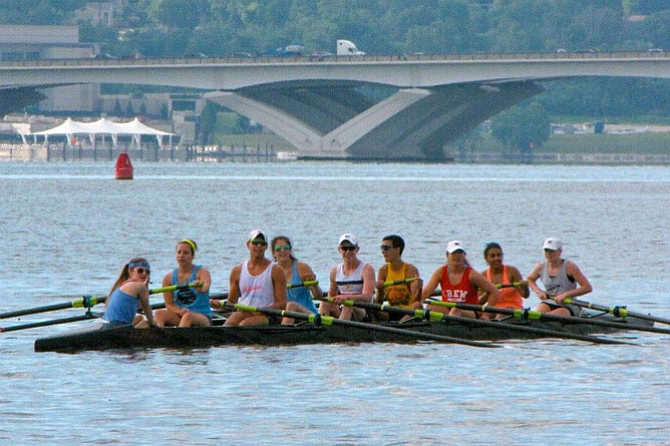 The summer crew student team of all-stars took on the coaches with a strong sprint at the end that brought them within 3 seconds of the coaches. Rowers include Elizabeth Roda (coxswain), Maeve Bradley, Carter Weitekamp, Hannah Posson, Preston Tracy, Stefanos Psaltis-Ivanis, Reed Kenney, Anissa Ashraf, and Caroline Hill. Photo Contributed

Almost 100 adult and student rowers and coxswains participated in this year’s contest. From middle school to adult rowers, novice to experienced rowers, single scullers to boats of eight, Alexandria rowers tested their skills against one another in a 500-meter course that ran from the Mirant Power Plant to the Dee Campbell Boathouse. About 200 spectators at the Dee Campbell Boathouse cheered on the competition, which ended with the annual "kids versus coaches" race. In a heated competition, the coaches narrowly beat the student rowers for the third straight year.

Novice, intermediate, and experienced rowers competed in 500-meter races in the early morning of Saturday, Aug. 1. Races included single and double sculls, quads, coxed fours, and eights. Alexandria Crew Boosters sponsored the summer programs, which focused on teaching rowing techniques to novices, improving the skills of intermediate rowers, and giving more experienced rowers diverse experiences, including the use of sculls, boats that require two oars versus the one oars used in sweep rowing.

Lexye Hearding, coordinator for the summer program and a MC for the event, said, “This summer has been a great experience for all of the rowers and coaches. Our novice youth and adults looked great in their first race, the intermediates really improved their technique from the beginning of the summer, and our sculling squad has never looked better.”

The most anticipated race of the day was the annual "kids versus coaches" race. The summer coaches, most of whom are former T.C. rowers, spent the summer helping the rowers develop their skills. They tested the students’ skills at the end of the season with a race. The coaches started the competition by doing a fancy standing shove off from the dock that was likely meant to intimidate their talented students. The students were unfazed, putting up a strong battle from the beginning. When the coaches moved ahead early, the students rowed even harder, closing the gap so that they finished less than 3 seconds behind the coaches. While the coaches celebrated their victory, they were also proud of the accomplishments of all of the students this summer.

“The scullers showed great improvements in their technique and the youth sweep races were very close. This is the hallmark of a successful summer” said Steve Weir, retired head coach of TC Williams crew who also helps out during the summer.

Hearding, who rowed on a championship team for T.C. Williams, said, “Summer rowing on the Potomac has been going on for many years, and I’ve been part of this program since 1996. It is a great opportunity for our high school rowers to improve their technique, learn to scull, and maintain their fitness in a relaxed and supportive environment.”

Rowing in Old Town will now shift to a fall program for novices and intermediates, as well as the Old Dominion Boat Club (ODBC) Fall Select Crew Program for competitive rowers, both run out of the Dee Campbell Boathouse. Alexandria’s rowing programs provide opportunities for all rowers, regardless of experience level. Individuals wishing to learn more about crew programs in Alexandria can access information at www.tcwcrew.org.