The Other Alexandria: Running for the Bull Dogs – Marian Stanfield
Votes

The Other Alexandria: Running for the Bull Dogs – Marian Stanfield 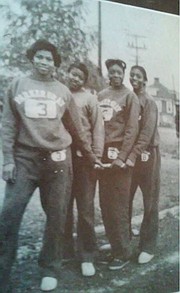 A 1963 picture – from left to right: Marian Stanfield, Barbara Rice, Patricia Watson and Janet Elliott. They were all part of Parker-Gray High School Field and Track Team. 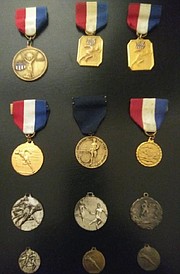 Some of Marian Stanfield’s medals that she received in Track and Field.

The early education of African Americans in Alexandria centered on reading, writing, arithmetic and recreation. Recreation in the school was mostly playing outside with classmates. These are typically the daily activities in the segregated schools from 1870 to 1919.

When Parker-Gray School started in 1920, as an elementary school, it gradually became a 12th grade high school in 1953. The curriculum expanded by offering high school courses and physical education.

For most of the students at Parker-Gray, it was the first time they participated in physical education in their school. To boost the spirit of the school’s athletic sports, they chose the Bull Dog as their mascot.

Marian Stanfied arrived at Parker-Gray High School in 1958 as a seventh grader. She loved running. In the eighth grade, she signed up for girls’ track and field under the supervision of Coach Adkins who was in charge of the girls’ track team. The eighth graders started training two to three days a week. She trained every day in the ninth grade. The girls’ track team started competing with other segregated schools in Virginia and in the District of Columbia.

Marian was a sprinter and a long distance runner. Her decision to be a runner was influenced by her idol, Wilma Rudolph, who won three gold medals in track and field in the 1960 Olympics.

Marian enjoyed the feel of the wind on her face while passing her opponents on the track. She won a gold medal at the Amateur Athletic Union (AAU) that put the Bull Dogs of Parker-Gray on the map. She continued winning as a sprinter and long distance runner. She won more than 12 medals and trophies.

She also had great oratory skills. In her last year of high school in 1964, Virginia Association of Elks awarded Marian Stanfield a $500 scholarship for winning the oratorical contest.

Marian Stanfield was born in 1946 to Elisha and Susie Younger Stanfield. Her parents migrated to Alexandria from Halifax, Va. Marian’s siblings are Julious, Irene, Susie, Blanche, Frances, Leon, Elisha, Martha, Herbert and Willie. She has two daughters, Monica and Nakeeah.

From 1961 to 1964, Marian followed the footprints of Wilma Rudolph who had inspired many African American girls in track and field. Wilma was Marian’s role model and the Bull Dogs gave Marian energy and strength to compete in sports.