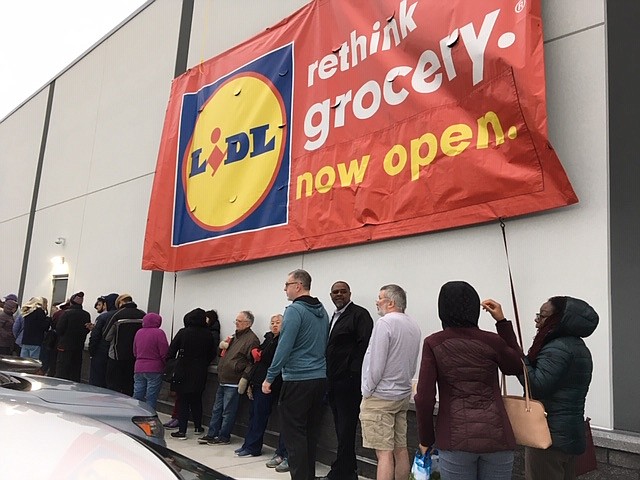 The line on the first day went around the corner. Photo by Mike Salmon.

The line went around the corner at the grand opening of Lidl food store on Commerce Street in Springfield, as many tried to be among the first 100

Enthusiasm was out the door at Lidl's in Springfield.

customers that would have a local claim to fame and a $100 gift card.

Springfield resident Edmond Melkonian was one of the first past the cut ribbon and hoopla outside. “The best store ever,” he said, “the service, the prices, the quality, unbelievable.”

The Springfield location is the 94th store in the chain and the closest to their headquarters in Arlington. The spot in Springfield was previously occupied by a car dealer but sat vacant for a while. The wheels were turning in then-Supervisor Jeff McKay’s office to get this store in to fill the void. McKay, who is now the Chairman of the Fairfax County Board of Supervisors, couldn’t make the early morning ceremony so his new staffer Hannah Menchhoff was there in his place. “We’re really excited to have another accessible, affordable food store,” she said. There is a relatively new Aldi food store right across the street as well.

Inside, the new vibe was present as well. The bakery and fresh food section is a big hit, abd they only have six rows so the shopper isn’t overwhelmed, said manager Julia Christophe.