Dyke Marsh Is Lush and Dotted with Colors in Summer
Votes

Dyke Marsh Is Lush and Dotted with Colors in Summer 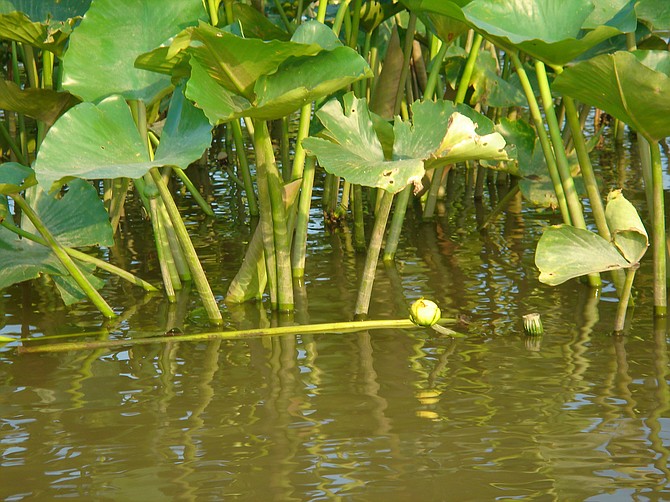 At the height of summer, many stout, six-or-so-inch green spikes poke out of the water in Dyke Marsh and sport violet-blue, funnel-shaped flowers that clump around the central stem amid the plant’s lance-shaped leaves. The upper, middle petal of each flower has two bright yellow spots. The flowers bloom for one day, die, and then others bloom. The plant’s called a pickerelweed, given this name because an observer who saw pickerel fish frequently in the same waters as the plant.

Below the water’s surface, pickerelweed has creeping rhizomes, horizontal underground stems, that muskrats like to eat. Many micro and macro invertebrates live on the plant, critters that are eaten by fish, amphibians, reptiles and other wildlife. Like other aquatic plants, they decompose and their bacteria and fungi provide food for many aquatic invertebrates. Waterfowl eat the pickerelweed seeds. Native Americans did too.

Pickerelweed is a common freshwater, wetland plant and a good example of the complexity and interdependence of living things. Freshwater, tidal wetlands are considered to be among nature’s most productive habitats. According to Wetlands, a National Audubon Society guide, “The tide-influenced riverine marshes of the mid-Atlantic region can produce a biomass of 12 to 15 tons per acre, an amount that includes only the stems and leaves growing above ground.” Underground production can be several times greater, says the guide.

The Dyke Marsh Wildlife Preserve has at least 300 known plant species, some that are considered imperiled in Virginia. In wetlands, many plants are what botanists call “emergents” because they are rooted in the wetland’s sediments, but their leaves and stems extend out of the water. These plants are hydrophytic or specially adapted to live in wet soils.

Here are three more plants that visitors often see in the summer at Dyke Marsh.

Narrow-leaf cattails dominate much of the marsh, like the area along the boardwalk across from Tulane Drive. Cattails have both a male and female flower. The hotdog-shaped male is dark brown. Below it is the similarly-shaped, green female flower. The narrow-leaf cattail is usually associated with saltwater environments. Dense cattail stands provide nesting areas and cover for many animals and some birds make nests from the leaves. Marsh wrens make intricate dome-shaped nests by weaving in and around the cattails. Traditional cultures used the leaves and stalks for mats, baskets and dolls and used some plant parts for food and healing.

Spatterdock or yellow pond lily has green, heart-shaped leaves that float above the water or are submersed. It has an especially intriguing yellow, golf-ball or cup-shaped flower that looks like it is partially open. Spatterdock also provides food and shelter for wildlife. Waterfowl eat the seeds and muskrats and beavers eat the rhizomes.

Near the Haul Road trail, boardwalk visitors can see the striking blossoms of the swamp rose mallow. This plant has five-petal, white flowers with a deep red center and central column of yellow stamens, attractive to several bee species that pollinate the plant.

While wetland plants provide aesthetic pleasure to humans and food and shelter for wildlife, they also provide ecological services. For example, they help stabilize the soil, attenuate wave energy and enhance water quality.

“Wetlands are unique areas that have a personality of their own, one that changes greatly from season to season,” wrote Janet Lyons and Sandra Jordan in Walking the Wetlands.

What Is Dyke Marsh?

Dyke Marsh is a freshwater, tidal marsh on Virginia’s Potomac River shoreline in northern Mount Vernon District. It is a unit of the George Washington Memorial Parkway, a national park managed by the U.S. National Park Service. It has three-foot tides twice a day and several habitats, including marsh, swamp forest and floodplain forest. To learn more, visit https://fodm.org/ and https://www.nps.gov/gwmp/index.htm