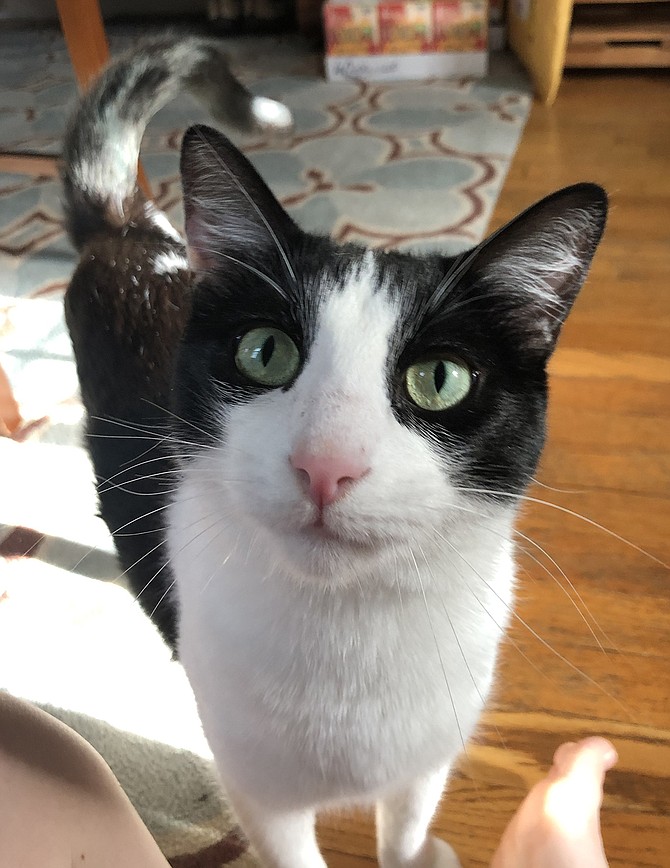 How could anyone resist those sweet eyes? Photo contributed by Kristin Murphy 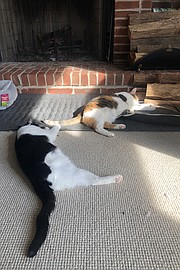 Grabbing a little shut-eye with Weezy.

They were already running late. So Kristin Murphy wasn't thrilled when her daughter Mia dragged her to see a cat she had spotted in the Petsmart adoption aisle. They were not even in the market for another cat. But after seeing the 8-ish-month-old tuxedo kitty, Murphy just couldn't get him out of her head.

While the unplanned cat addition was discussed with her husband and son, there was truly going to be no talking Murphy and young Mia out of the sweet black-and-white rescue. That meant the only real question was whether the new cat would get along with Weezy, who’d enjoyed being an only cat-child for six years.

So all agreed: If the addition stressed out Weezy or the felines didn't get along, they would have no choice but to rehome the new kitty. But Murphy was sure it wouldn't come to that.

The new kitty hadn’t gotten an awesome start in life. By the time he ended up at a kill shelter, his back right leg was paralyzed and he was in terrible pain. When members of a rescue found him there, they didn't see his injuries or his fear. Instead, what they saw was his potential. The vet recommended amputating the painful limb and the rescue paid for the surgery that would help make a happy life possible.

By the time Mia found the little guy at Petsmart, he was fully healed from surgery and ready to find his forever family. Kristin says that while he was a little skittish when she went back for a meet-and-greet, he was also playful and a big-time cuddler.

The Murphy's kicked around a few name ideas which all pretty much centered around the cat's three-legged status. Tripod or Trip for short was high on the list. One of the kids' friends suggested Threesy, to go with Weezy, their other cat. But Wobble is the name that stuck.

Bringing Wobble home meant developing a strategy to introduce him to princess, with a small "p," Weezy. The vet had advice which included adding pheromone diffusers around the house. The Murphy's also quarantined Wobble for a week, passing blankets and toys back and forth between the two cats, so they could get used to each others' scents.

And, just in case, their first meeting was held from either side of a glass door. Murphy says that Weezy was definitely a bit skeptical about sharing the family's attention at first.

But two years later, Murphy says it's like Wobble has always been part of the family. The two cats often nap next to each other. And while Wobble is definitely the pesky little brother to Weezy's annoyed teenage sister, Murphy says, "it works."

Aside from taking the lid off of the litter box, the Murphy's didn't need to make any accommodations for Wobble, who enjoys jumping on- and off- furniture and takes the stairs with the same enthusiasm as Weezy.

Wobble is happiest snuggling with one of his people, all of whom he adores equally, with temporary status elevation for anyone with a treat.

Yup, that's one very happy ending for the three-legged rescue who, at one time, was destined for death at a kill shelter.

If Wobble's story has piqued your interest in adding a lovable tripod feline into your family, you are in luck! The folks at the Lost Dog and Cat Foundation have told me they have an adorable brown tabby, Calliope, born with a limb abnormality, who is available for adoption. Email cats@lostdogrescue.org to learn more.