The Lure of Kids’ Trout Fishing Day in Reston
Votes

The Lure of Kids’ Trout Fishing Day in Reston 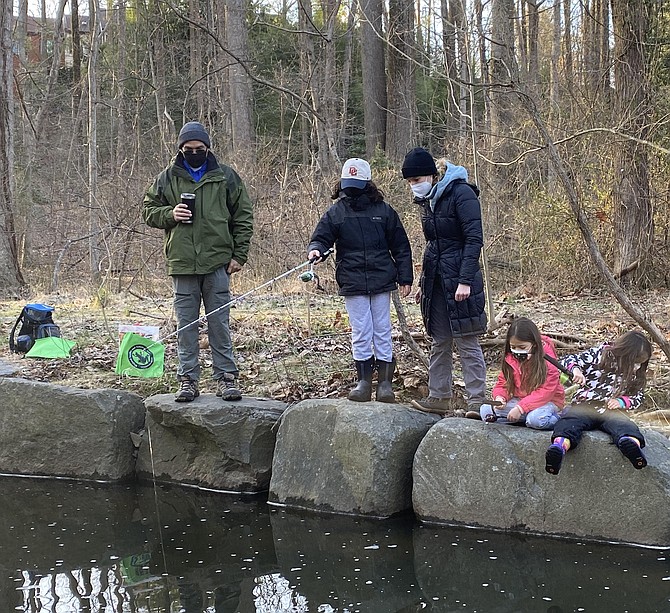 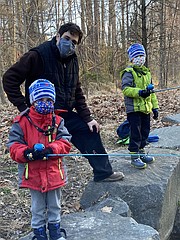 The Gandolfo family of Reston, Mike and his sons Nate, 7, and Will, 5, at Kids’ Trout Fishing Day, Saturday, March 20.

Reston Association moved forward with its ever-popular Kids’ Trout Fishing Day, Saturday, March 20. Young anglers Will Gandolfo, 5, and brother Nate, 7, of Reston, hopeful and excited to hook a fish, dropped their lines into a deep dark pool of Snakeden Branch stream off Soapstone Drive. Dad Mike walked the rocks on the bank between his sons. “We’ve come every year but last year,” Mike said. “We haven’t caught yet.” Will cast his line again and let it drift, hopeful of hooking what could be a freshly caught dinner.

Going fishing at the local stream stocked with hundreds of trout seemed most appealing to Will and Nate, as did their dad’s approval as they tried different tips he gave them. Fishing proved not only about the elusive fish but catching a good time.

According to Will Peterson, Watershed Manager, Reston Association stocked the stream with 300 pounds of trout earlier in the week, up to if not greater than 15 inches. Standing near the water’s edge, Peterson said, “This year, we stocked about six pools, and that’s the areas where the water is deep in the stream between the riffles.” Riffles are where the surface of the water is textured with bumps. According to Peterson, the stream’s current creates the riffles flowing over boulders and rocks running bank to bank, controlling the stream bed slope. Riffles are the gateways and exits to the pools, places where the trout rest, and where RA stocked them. In moving water, like Snakeden Branch stream, the fish tend to stay in the pools and wait for the current to bring food to them. Peterson said the trout would survive until the water temperature reached 70 degrees.

Because of the governor’s restrictions on the size of gatherings and wanting the event to be safe for everyone and not feel crowded, staff from Reston Association spread groups out along the stream on both sides of Soapstone. “We also limited it to about 12 families per hour block,” Peterson added.

DOWNSTREAM from the Gandolfo family, the Rodriguez family, Bernardo and his wife Lysandra, and their children Adrian, 10, Alicia, 7, and Anabel,4, searched the water, looking for trout. “This is our third time. Adrian caught six fish last time,” said Bernardo. Asked his secret to success, Adrian said in a loud voice, “Trout magnet, a lure.”

Nearby, George Paine, a volunteer with the nonprofit organization Trout Unlimited based in Arlington, moved along the banks helping novice fishers. He shared advice and showed the children how to handle their rods. He paused a moment on the bank opposite from the Rodriguez family and opened his lure box to pull out a Trout Magnet™. “It attracts the trout,” he said.

AT THAT MOMENT, a loud splash sounded. “Almost had one,” cried out Adrian from the other bank. A trout apparently had hooked but got away. Undaunted, Adrian swung his fishing line into the water again. For a few seconds, Paine turned his attention to naming local birds that swooped down to the streams to catch the fish. Hearing splashing again, he looked across the stream. “He’s got one,” whooped Paine.

“Don’t put him over the water. Move back,” Dad Bernardo said. Adrian grounded his feet. He positioned his pole bent heavy with the fighting trout. He tipped the rod up and began taking in the slack.

Adrian Rodriguez, 10, pulled out the first trout of the day at 8:38 a.m. “Congratulations,” called Paine.