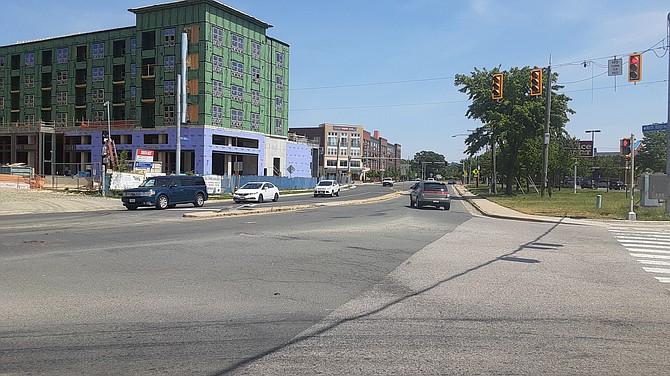 The intersection at Penn Daw sees much action as this area was dubbed a revitalization center on Richmond Highway. Photo by Mike Salmon.

During Fairfax County’s Economic Development Authority’s webinar entitled “Investing in Richmond Highway,” it was mentioned more than once that the county and state policies were in place to improve the corridor, but change doesn’t happen overnight.

Participants in the call referred to the recent study, “Richmond Highway Market Assessment Study,” dated Feb. 8, 2021 by DC-based “Partners for Economic Solutions,” along with the Embark plan for revitalization. Buzzwords included walkable areas and needed multi-family housing. The corridor they used was bordered by the future Amazon complex in the north, and Fort Belvoir in the south.

The study described the corridor as a collection of auto-oriented shopping centers, freestanding retail and service businesses and multiple apartment complexes taking advantage of the corridor’s bus network. As a result, the corridor faces a set of issues common to many older highway corridors – congestion exacerbated by too many curb cuts, visual clutter from signage and parking lots lining the street, fragmented property ownership and obsolete facilities, it said.

A county program that is helping development is the Fairfax County Economic Incentive Program. This program was launched by the county on Sept. 15, 2020, to provide economic incentives to the private sector for the revitalization and redevelopment of properties in select commercial areas. It encourages economic growth by providing multiple financial and regulatory incentives including a ten percent reduction of site plan fees and a partial abatement of the real estate taxes on the difference between the base value of a property and its post-development value, including any increase or decrease in the annual assessed value of the tax-exempt portion of the property.

To qualify for the county Economic Incentive Program, the development must be in one of six areas around the county, their information stated. These six are: the Commercial Revitalization Districts (CRDs) of Annandale, Baileys Crossroads/Seven Corners, and McLean; the Lincolnia Commercial Revitalization Area (CRA); the Richmond Highway CRD and Suburban Neighborhood Areas, and a portion of the Huntington Transit Station Area (TSA); and, the Springfield CRD and TSA (non-single-family portion of the TSA). Two of these are in this corridor.

“This program would make many new projects feasible,” said Elizabeth Hagg at the Fairfax County Planning and Development office.

Penn Daw at the Center

Dan Fulton of Zanda noted that the Penn Daw intersection was the “rock solid location,” that development hovered around. Huntington, the Riverside apartment buildings and a few projects that are underway were mentioned as well.

“Our goal is to transform these centers from car-centric to walkable communities,” said Hagg.

Development time is now, they agreed, and Victor Hoskins, the Fairfax County EDA president, called it a “window of opportunity opening up.” On the panel were developers Mark Viani of Bean, Kinney and Korman; Ed Murn of Washington REIT; Christine Robertson of Pennrose Development, and Andrew McIntyre of Combined Properties. They all had a role in community development and were enthusiastic about the potential the area has. They all remembered the fire of February 2020 at a new development right in the heart of Penn Daw. McIntyre’s company has a presence in that development “The rebuild cost is north of $85 million,” he said, “about a 16-month delay but we’re back and couldn’t do it without county support,” McIntyre said.

On the Embark map, there are several centers of concentration, and Fulton said the residential will work with retail. “Create demand you have to build the excitement around these nodes,” he said.

The nodes are set to be connected by a bus rapid transit line, which is a big part of Embark, and the panel pointed out that transportation is one factor, as well as walkable communities. They compared the potential in the corridor to a situation that is already working along Wilson Boulevard in Arlington. “Everybody gets the vision, that doesn’t happen everywhere,” said McIntyre.

When it came to the question of “next steps?”, there were mentions of streamlining the approval process with the county so the developers would have a “certainty of timing,” McIntyre said, and threw out the suggestion that the county did a survey of users to see what they thought.

Supervisor Rodney Lusk (D-Lee) was part of the discussion, and pointed at his past experience with the FCEDA. He grew up in the area and said the study “represents an important first step.”