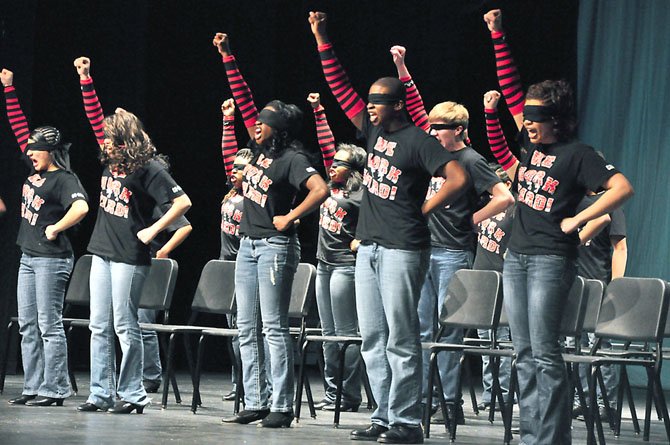 Herndon — Fresh off a season in which they won the national championship, the Herndon High School Step Team kicked off their season by hosting the 14th annual StompFest Saturday at Herndon High. The event featured nine local teams competing for first place.

The team got the school into the spirit the Friday before the competition, creating a flash mob in the cafeteria. Since they only performed and didn’t compete in StompFest, they were able to have a little fun with their routine.

"Everything else we’ll do this season will be a competition, but with this routine we had a little fun, relaxed a little bit," said senior Izaba Sarabi, one of the team‘s co-captains. 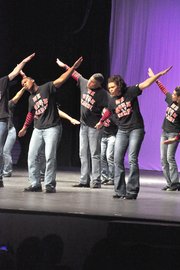 Coach Gary Bushrod said the team was able to put a "fun twist" on their usual routine for StompFest, but he knows teams will have Herndon on their radar come competition season.

"People know Herndon is good now, which means they’ll be ready for us," he said. "We’ll take a week off after StompFest, and then get into competition mode. The team knows the stakes are higher, they’re feeling the pressure, but we’re ready for it. It used to take us a few competitions to get into the swing of things, not this year."

THE PRESSURE began day one for the Step Team, even as they were hosting auditions for the vacant spots. Bushrod says the auditions were tougher than they’ve ever been.

"We’ve been going hard since the first day of school, adding an extra hour to all our practices," said senior Lia-Marie Marmolejos, one of the team‘s co-captains. "Our championship has raised the bar for everybody on this team."

Recognition has come along with their championship last year, Marmolejos says people will recognize them from YouTube clips, and even members of her church in Tysons Corner have heard about the team.

Last year’s team lost 11 seniors to graduation, and they welcomed five new members, three freshman and two sophomores. The new members say they know exactly what they’ve got themselves into.

"There was pressure in the beginning, but I think we’ve come together and now I really feel like part of the team," said freshman Breyuanna Wright, who has been stepping since she was in elementary school. "I’ve been watching the team for years, and now I feel like I’ve become part of the family."

Sophomore Hannah Vaughn says she and the team treat every practice like it counts.

"Even though we weren’t competing in StompFest, we still went full out during each and every practice," she said. "We’re treating every practice like we’re on stage at Nationals, because that’s how you ramp up for the competition."

THE STEP TEAM will have six competitions this year, including a trip to nationals for what they hope will be a second championship.

"We know teams will be coming for us, that’s what happens when you win," said senior Shammah Okai, one of the captains. "But we’re ready to get back to nationals and keep our title."