Majors lose to Oakton for the second time this season.

Fairfax — Mount Vernon girls’ basketball coach Courtney Coffer hung his head and fought back tears as he sat at the end of the Majors’ bench after their Northern Region semifinal matchup with Oakton on Feb. 24. As time passed, he wondered if he had done enough. How could this happen again? 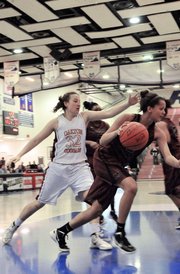 Mount Vernon entered the contest with a 25-1 record, but that lone defeat was a 30-point shellacking from Oakton on Dec. 6. The Majors had won 23 consecutive games and captured a National District title since that lopsided loss, and entered their rematch with the undefeated Cougars with a shot at revenge and berth in the state tournament. With a chance to show they belonged among the top teams in the region, Mount Vernon went more than three minutes before scoring a point, trailed by 19 at halftime and eventually lost to Oakton 59-35 at Robinson Secondary School. After the game, Coffer stood outside the Majors’ locker room and expressed confusion about the team’s performance.

"It definitely hurts," Coffer said. "It hurts because deep down in my heart I know we’re on the same level with that team and for some odd reason we just refuse to show that we’re on the same level with them when we play them. I don’t know what it is. Maybe I could have done a better job coaching. I don’t know. Maybe I’m not preparing them for these types of games when they’re playing these types of teams. I’m going to take all the blame because for some reason when we come to play that team, we’re not ready."

Mount Vernon scored at least 80 points in seven games this season, reached the 90-point mark three times and even eclipsed 100 points on two occasions. The Majors won the Boo Williams Christmas Classic and earned notable victories against Western Branch and Robinson. But when it came time to face Oakton, Mount Vernon produced its two lowest offensive outputs (41 and 35) of the season. 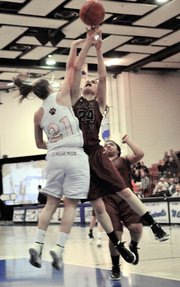 "These kids work hard," Coffer said. "We put in all this work. We had a great year. I’m not taking anything away from what we did, but I’m at a loss for words. I don’t know what we have to do to get these kids to play and show that we’re on the same level as that team, and I’ve got my head down fighting back tears because I feel like I’m not preparing them. [Oakton beat us] twice [and] we’re not even close, and that hurts me at the end of the day."

Gray and Elizabeth Owusuwaa were the only seniors on Mount Vernon’s roster. However, Coffer didn’t use youth as an excuse.

"We took lumps last year," he said. "We’ve got a lot of juniors on this team that play all year round. … It’s not about taking lumps right now. This was our year. Everybody always says next year, I don’t believe that. Our year is now."

Mount Vernon finished the season ranked No. 19 in the Washington Post’s top 20. While Coffer had his sights set on making it the state tournament this season, the Majors figure to be loaded for the 2012-13 campaign. While Oakton will lose the Coyer sisters and West Springfield will graduate standouts April Robinson and Logan Battle, Mount Vernon will return the majority of its roster. Led by Loftus, the Majors’ top scoring threat and a first-team all-region selection, Dunham, the team’s primary ball-handler, and forward Samantha Porter, Mount Vernon will likely be one of the favorites to compete for a region championship.

"Only thing I can say is, with only having two seniors, we’ll be back next year, and hopefully we won’t be going through this again."

"Only thing I can say is, with only having two seniors, we’ll be back next year," Coffer said, "and hopefully we won’t be going through this again."