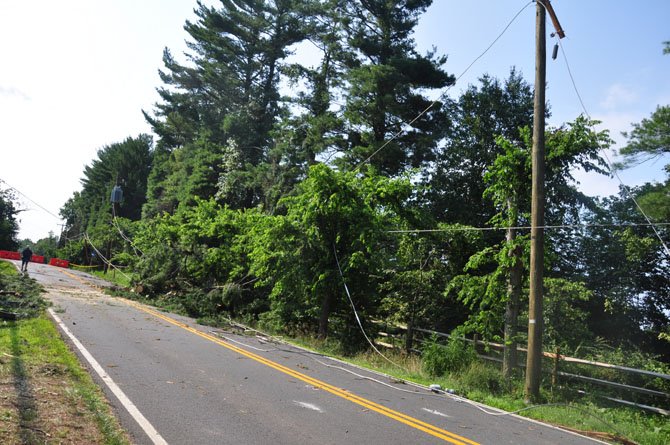 Great Falls — After a night of watching blinding flashes of lightning, sheets of rain and pieces of trees flying around his yard, George Matmos of McLean sought out Saturday morning normalcy the best he knew how: with a cup of morning coffee. 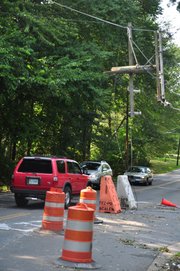 Cars maneuver around a blocked off area near a broken electric pole on Great Falls Street in McLean, which was damaged during the Friday, June 29 storms.

“I figured I’d grab a cup of coffee and then go back and assess the damage at my place and start cleaning up before it got too hot,” he said. “But I guess several hundred others had that same idea.”

The several hundred all lined up at the Starbucks kiosk at the Giant in McLean, which was one of the only local places with power Saturday morning. Residential power, traffic lights and almost all businesses in the area stood dark throughout the day as they waited for the damage to be cleared up.

“I never thought I’d see the day a 7-11 was closed,” said Karen Bernard of McLean, as she tried to go into the 7-11 at the corner of Old Dominion Drive and Spring Hill Road. “No gas pumps, no hot food available anywhere, thank goodness we have a manual can opener at home.”

The storm, known as a derecho, is an especially violent thunderstorm characterized by extremely high winds. The National Weather Service recorded gusts up to 89 miles per hour in nearby Reston.

With the only working traffic lights courtesy of backup generators installed at major intersections, such as Dolley Madison Boulevard and Old Dominion Road, most intersections were reduced to fourway stops with cars to alternate. Even though the roads were congested and intersections tough to navigate, many people resorted to their cars as their only source of power.

“My laptop is dead, so is portable DVD player the kids have,and there’s no outlet to plug them into a charge,” said Brady Walter of Great Falls. “I’ve got my iPhone and an iPod, which I can plug into my car, which is basically just a generator at this point. Usually I’d jump at the chance to cruise around Great Falls on a nice summer day, but I’ve ran into several roadblocks, and I haven’t seen many workers out, so who knows when it will be cleared up. I guess I’ll just look for a shady spot in the driveway.”

Georgetown Pike was blocked off just east of Leigh Mill Road as of Sunday afternoon, as a group of trees took down several power poles near the intersection, and another one was broken a few hundred yards down the road. At one point, more than 40 percent of the customers served by Dominion Power were without electricity, though as of Sunday afternoon Dominion said about half of those had been restored. As of Sunday evening, most of Vienna, Great Falls and parts of McLean were still without power.

More updates can be found at www.dom.com.