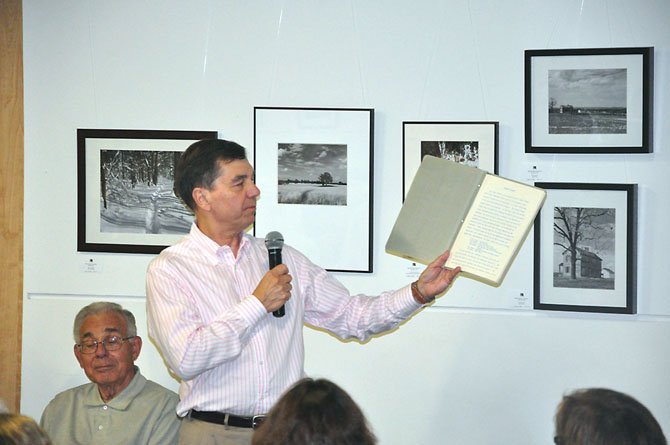 Chuck Veatch, who worked with Robert Simon during the original construction of Lake Anne and Reston, shows his sales manual that he received upon being hired by Simon in 1964. Photo by Alex McVeigh.

Reston — When Robert Simon sold Carnegie Hall in 1960 and bought the land that was to become Reston in March 1961, it was the first of many steps in the founding of the community that bears his initials. Over the next two years, Simon set about the massive task of laying out the guidelines of what he wanted Reston to be, and getting approval from Fairfax County.

Once that approval came in July 1962, Simon had his work cut out for him. He envisioned a lakeside plaza (in a place where there wasn’t a lake) based off the plazas he had seen during his travels in Europe.

But his community wasn’t to be defined by just architecture.

"The challenge was to convince people they were buying into a community with amenities, not just a place to live," said Loren Bruce of the Reston Historic Trust, who presented the story of the construction and opening of Lake Anne and the surrounding areas. "It was an unbelievably complex task, and they were kind of making it up on the fly. No one had ever done it before on this scale. Selling the concept, raising the money, keeping the project going and building a team. That’s what Bob was doing, among many other things." 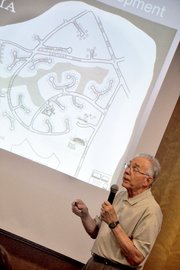 Fran Steinbauer, an engineer and eventual president of the Reston Land Corporation, speaks about the early designs of Reston at the Reston Community Center Lake Anne.

Glenn Saunders, who was hired in November 1961 to be vice president in charge of planning, engineering and construction, remembers the huge task that was in front of them.

"We had lots to do, as the saying goes, nothing was ‘shovel ready,’" he said. "We had to go ahead, but still had lots of engineering to do."

ONE OF THE FIRST THINGS they did when building Lake Anne was hire a forester. Instead of doing his usual job, which was to examine large land parcels and check out the trees, Simon and company had a different plan for him.

"We wanted him to go to the areas where there would be construction underway, identify the trees, see which ones should come out and see which ones were good specimens that should stay," Saunders said. "Before Lake Anne was a lake, it was a beautiful stream valley with major tree coverage. As we walked through there we realized that everything within the contour of the lake’s water level would have to be removed. There were hundreds and hundreds of beautiful dogwood, myrtle and holly trees and we thought it would be a shame to tear them all out. So we decided to start our own plant nursery, and we had one right behind Brown’s Chapel."

The transplanted trees were soon re-planted at the nursery, and were eventually re-planted as needed as the project developed. The company also purchased dozens of old whiskey barrels from the Bowman Distillery, cut them in two and turned them upside down to use as planters for a few dogwood trees at a time.

At the dedication of Lake Anne Center, the trees in their whiskey barrel planters were presented to each of the dignitaries in attendance.

Chuck Veatch remembered getting a job in Reston a few months after graduating from college, picking up his sales manual and getting to work quickly selling the 227 residences available. There were 90 in Waterview Cluster, 90 in Hickory Cluster and 47 along Washington Plaza, priced from $23,000 to $46,000.

He recalled the press opening on Oct. 12, 1964, the hype that led up to it and an unexpected development during the opening.

"Reston was a huge deal, it was literally known all around the world before it even opened," Veatch said. "It was covered by all the New York and Washington papers, every magazine done some sort of spread on it. Everyone came out and was really impressed, but it turned out to be the day that [Soviet leader Nikita] Khrushchev was deposed. So all of a sudden all the newspaper people were trying to find phones and there weren’t too many places that were open."

THE PRESS OPENING was on a Wednesday, and the public opening was scheduled for that Saturday.

"This was going to be when we were really going to show off. The models were going to be ready. Prior to the press opening, we worked tirelessly for three nights in a row, up to one, two o’clock in the morning getting everything ready," Veatch said. "So we thought we were all set, and Thursday morning after the press opening we turned on the water. And somebody hadn’t put reducer valves going into the models, so all the hot water tanks blew and flooded the models."

"By the time the sun came up Saturday, we were ready, and over those two days we had about 10,000 people come through," he said. "But we didn’t sell a single house that weekend, not one. In fact, the story is that the only deposit we took was from a Pekingese in the master bedroom of one of the models."

He said they weren’t disheartened by the lack of first weekend sales, they had sold a few prior to the opening, and that the opening was so chaotic that there was no time to sit down and go over figures with people.

"But Reston was on the map, and people for better or for worse knew what we were about, and we were underway as a sales organization," he said.