Fireworks Go Off at Turner Farm

Annual show was postponed from July 4. 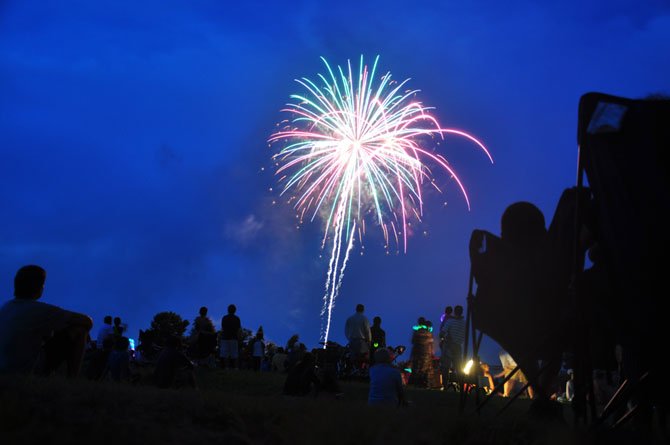 Great Falls — While going a week without power meant no video games or television for Jeremie Johnson, 7, of Great Falls, it did some with one perk.

"Because the fireworks were put off by a week, we got to go to the show at Langley [High School] and then come to Turner Farm, so we got double the fireworks this year," he said. "Last week was pretty hard, but I think I could do it again for two fireworks shows instead of one." 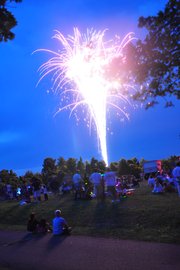 Visitors to Turner Farm Saturday, July 14 watch the annual fireworks show in Great Falls, which was postponed from July 4.

His father Scott disagreed, saying "he talks big now, but he was crawling the walls all week last week, he had fun at the fireworks show at Langley, but went right back to being hot and miserable when we got home."

The annual Great Falls fireworks show was postponed 10 days due to the blackouts caused by the storms the weekend before. That didn’t seem to affect attendance, as shortly after the gates opened at Turner Farm Saturday, July 14, cars began streaming in.

"I’m really proud of the organizers that they were able to get the word out so effectively about the change in date, and that they stuck with the idea of putting on the show," said Amy Lennon of Great Falls. "Sure, it’s just a fireworks show, but I also think it shows the resiliency of this community when it comes to facing tough times. We went without power for so long, but that only made us more determined to come out and have a good time together."

Visitors set up their blankets and chairs from the observatory next to Springvale Road all the way to the horse-riding course.

"Part of me thinks it might have worked out for the best for my kids," said Jon Putnam of Great Falls. "Sometimes the kids get too tired at the parade and games on the green, and we don’t end up making it to the fireworks. This year we could space it out a little bit and hit both with plenty of energy. I think it made both events more enjoyable."