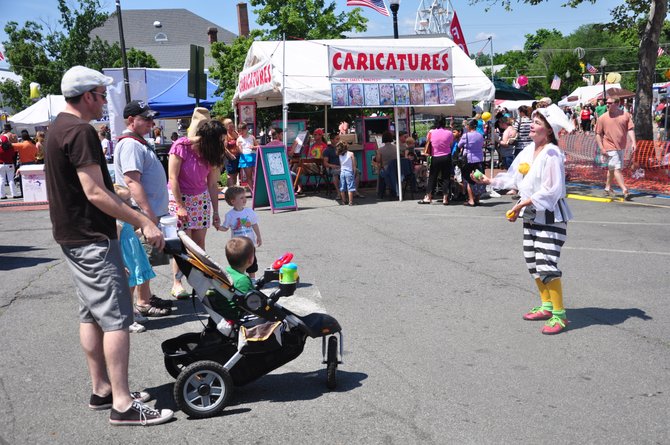 Guests at the Herndon Festival watch a juggler perform at the Kid’s Alley Sunday, June 3. Photo by Alex McVeigh.

Herndon — Out of all the rides, games, food, activities and vendors at this year’s Herndon Festival, Geoff Smith, 12, of Herndon, says one thing will stick out in his mind: a robot that can shoot baskets. 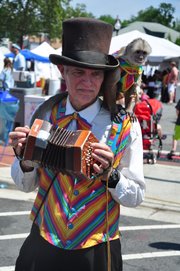 Jerry Brown, The Monkey Man and Django entertain at the Herndon Festival.

The robot was created by the Herndon High School robotics team and can shoot basketballs at a very high percentage.

"I’ve never seen anything like it," Smith said. "They let me feed the basketballs into the robot, and I watched it ‘pick up’ the ball and shoot it at the hoop, and it went in almost every time. It’s really cool that it’s possible to build a machine that can do a task like that."

The robotics booth was one of dozens of local groups at the annual festival.

Jordan Evans, 7, said her favorite part was Jerry Brown, aka The Monkey Man and his companion Django. The two walked along the festival Saturday and Sunday interacting with festival goers wherever they could.

"The monkey is so cute, even though it was a little scary when it would pick up the coin from my hand," Evans said, referring to Django’s trick where she would pick up a coin from someone’s hand and return it to Brown. "Too bad I don’t think my parents would ever let me get a monkey." 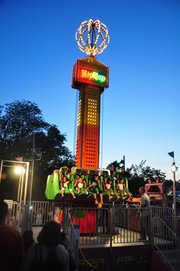 Riders of the Hip Hop prepare for a drop at the Herndon Festival.

The parking lot along Lynn Street was transformed into a scene straight out of a carnival, with a Ferris wheel and other rides, as well as a selection of foods such as funnel cakes, cotton candy, caramel apples and more.

"I thought the amount of rides this year was the best I’ve ever seen, they really seemed to expand the area and add in a lot of new stuff," said Harry Macklin, 15, of Centreville. "I’ve been coming to this festival with my family for years, and I can’t remember a time when I couldn’t get in all the rides in a day, but that’s what happened. I think I’ll have to come back another day just to fit them all in."

Three different stages featured a wide variety of live entertainment at the Municipal Center, the Depot Stage near Elden Street and the Café Stage in the parking lot behind the Dairy Queen.

"The lineup of musical acts across the weekend was really well done," said Jean Creed of Herndon. "It was easy to strike a balance between running around to the rides and sitting back, enjoying the weather and some good music."