Honored at the Pentagon
Votes

Honored at the Pentagon

A private tour for seventh-grader who wants to become a U.S. Army Ranger. 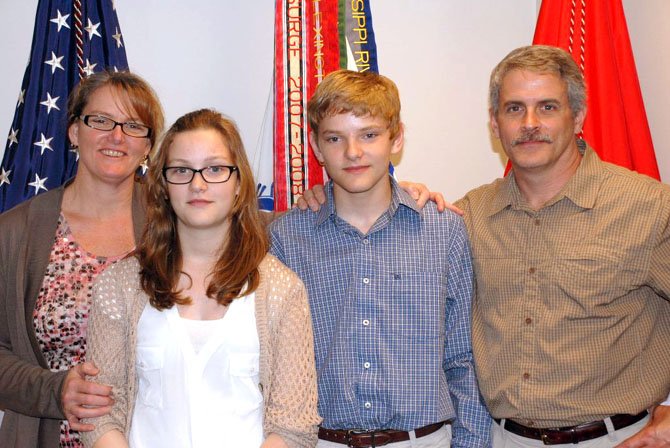 Travis Catina with his family: mother, Cate, who is a lieutenant colonel currently serving at Ft. Belvoir; sister, Rebecca, a sixth grader at Lorton Station; and father, Rich, who retired this year after 20 years of service in the Army as a member of the Special Forces. Photo by Amiee Freeman.

"What do you want to do when you grow up?" This question, posed so often to young adults, typically results in ambiguous, pie-in-the-sky answers. Lake Braddock seventh grader and Springfield resident Travis Catina had a very specific response to that question, one that when published in the Dec. 30 Children’s Issue of The Connection caught the attention of U.S. Army officers at the Pentagon and earned him and his family a private tour.

"When I grow up, I want to be an Army Ranger, an Army Green Beret, and a member of Delta Force. Before I become a member of these units, I plan on graduating from WestPoint, the Army Academy. My dad is a retired Army Green Beret, and my great uncle, prior to the Vietnam War, started the modern day JSOC (Joint Special Operations Command) unit, Delta Force. Men of this unit are some of the most highly trained soldiers in the U.S. military. These are all things I plan on doing when I grow up."

In the brief essay which Catina wrote for an extra credit assignment in his English class and was submitted by his teacher, Jeanne Okano, to The Connection for inclusion in its annual Children’s Connection issue, he stated that when he grows up he wants to follow in his father’s footsteps and become an Army Ranger. Catina’s family has a long and illustrious history in the Army. Catina’s father, Rich, retired from the Army this year after serving for 20 years with the Special Forces. Catina’s mother, Cate, is also in the Army, currently serving as a lieutenant colonel at Ft. Belvoir. Catina’s great-uncle founded Delta Force, the U.S. Army’s tier one counter-terrorism unit.

"I’ve been interested in the military my whole life, and I wanted to express my interest by responding to the extra credit question," said Catina.

"Travis is very balanced," said his mother, Cate. "At 13, I didn’t know I would enter the army. When I did enter, I thought it would be only for four years. Travis has a goal and is very driven toward it. I have no doubt that he will achieve his goal. 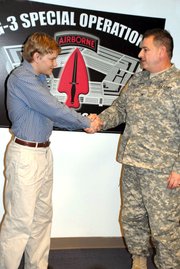 Col. Robert Cornelius thanks Lake Braddock 7th-grader, Travis Catina, for his interest in Special Forces during a tour of the Pentagon. In an essay published in the Connection’s Children’s Issue, Catina expressed his desire to become a U.S. Army Ranger. Officers at the Pentagon said his essay was "motivational."

"This is a big stress off my shoulders," said Catina of the briefing. Catina said that for the past two years he has been wondering how to achieve his goal of joining Special Forces. The officers on hand that day, gave him some very specific instructions.

"Stay right where you are at: physically fit and serious about your education. It is very hard to find individuals motivated about education and physically fit with a strong moral compass. Take what mom and dad have taught you to heart and keep your nose clean," was the advice given by Sgt. Maj. Scott Parker. 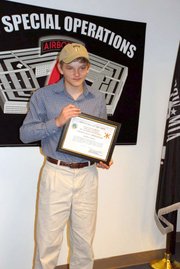 Seventh grade Lake Braddock student, Travis Catina, received a certificate of appreciation during a tour of the Pentagon.

"Just as colleges look for balanced individuals, so does Special Forces. It is good to have balance in life and spread out your interests," said LTC Terence McGuire.

"You are on the right path. As you get older, know what right looks like. When you get in difficult situations, ask yourself: ‘What would mom and dad say?’ Stay on the right path," advised MSgt. Calvin Sowell.

McGuire hopes that Catina’s visit to the Pentagon will be as motivational to him as his essay was to the members of Special Forces. "His letter was inspirational to us. He’s motivational for all of us," said McGuire.