Lake Anne Hosts ‘Out of Place’ 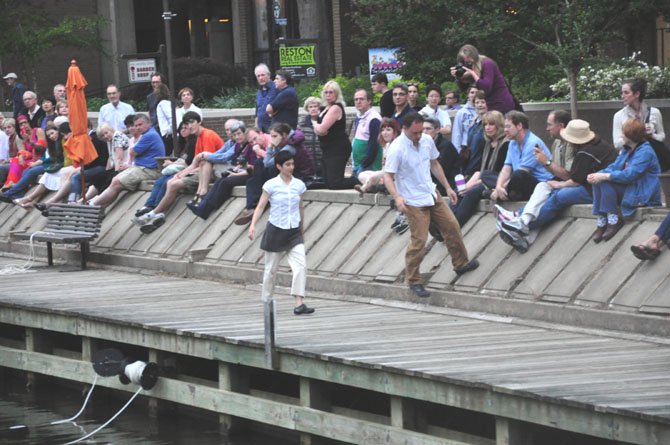 Sharon Mansur and Daniel Burkholder use the architecture of Lake Anne in their "Out of Place" performance Sunday, May 6. Photo by Alex McVeigh.

Reston — As dozens gathered around Lake Anne Sunday evening for the dance performance for the Reston Museum’s "Out of Place" exhibit, many had no idea what they were looking for. Which is why, when a male and female in matching white shirts started walking along the dock, at first no one paid attention. 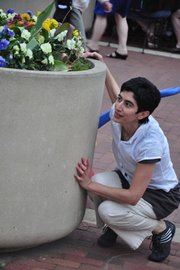 Dance artist Sharon Mansur crouches down as part of the "Out of Place" performance at Lake Anne Sunday, May 6.

But as the duo began twirling around the dock, crouching on benches and laying on the ground, soon people took notice. Dance artist Sharon Mansur and her longtime collaborator Daniel Burkholder began using every part of the plaza as they moved.

"It was fascinating to watch them use everything nearby, the benches, the concrete slopes, the platforms," said Raul Finch of Reston. "Not only that, but every movement was different, it all flowed so naturally, I’m not sure if it was improvised or planned in that much detail, but it was very pleasing to the eye."

After they made their way down the west side of Lake Anne Plaza, Mansur and Burkholder used the nearby Washington Plaza Baptist Church as part of their performance. Burkholder made his way to the roof and lowered a white rope to Mansur, who picked it up, and dragged it back toward the lake.

"As a dancer I work visually as well as kinetically, so I spent time learning through photographs, studying the texture, walking through the plaza, seeing how my body felt in certain places," Mansur said. "I imagined both the private use as well as public use, I love the mixed-use nature of this area."

Burkholder said "a lot of what we did tonight was improvisational, but we were already primed and ready to do this exploration together." 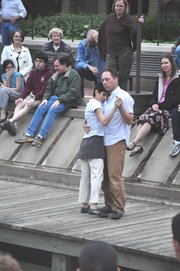 Daniel Burkholder and Sharon Mansur perform "Out of Place" part of an exhibit inspired by the architecture and history of Reston at Lake Anne Sunday, May 6.

"OUT OF PLACE" is part contemporary dance performance, part "site-situated installation" that uses the history, architecture and sculpture of Reston, particularly Lake Anne, as inspiration. Presented by the Reston Community Center, Initiative for Public Art-Reston, the Friends of Lake Anne and the Reston Museum, it was conceived by Mansur and architect Ronit Eisenbach.

"Sharon and I started developing this piece over a year ago, Eisenbach said. "The start of our research was thinking about how we would collaborate together. I’m an architect and artist, Sharon is a dance artist, we think in different ways and we also think in some similar ways. We spent time trying to figure out where our questions and interests overlapped and where there was a productive friction."

Eisenbach said she has an aunt who lives in Reston and so she visits at least once a year, and has always held the area in high regard.

"This place is a space I’ve always held very dear and always very inspired by," she said. "When we decided together to use this place, it gave me an opportunity to look much more closely at the architecture, at how people use the space."

Mansur said they came up with the name "Out of Place" last Fall, and feels it has multiple meanings.

"We both felt it had several layers to it, the sense of growing out of a place, emerging in an integral organic way out of place, but yet introducing elements into this place, so in a sense maybe things might seem a little out of place," she said. "Some of the playfulness as well as kinetic visual elements of the performance might seem a little unusual, so that was also something we wanted to play with."

THIS WAS THE SECOND work done by Eisenbach and Mansur inspired by Reston and Lake Anne. They have a third work planned that will happen Sept. 15. The "Out of Place" exhibit will be on display at Lake Anne until May 13.