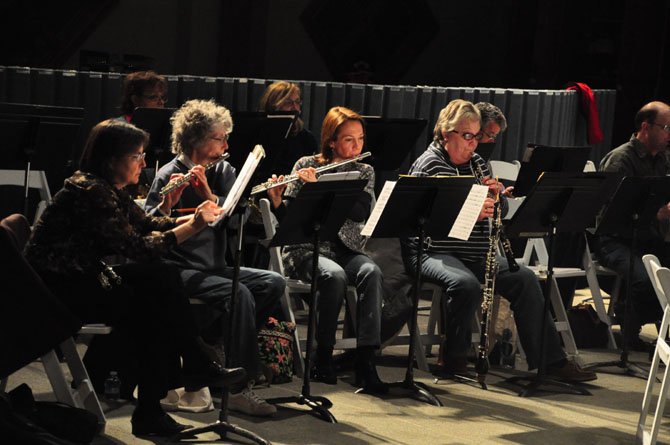 Members of the Reston Community Orchestra rehearse in preparation of their 25th season at the Sunset Hills Montessori School. Photo by Alex McVeigh.

Twenty-five years ago, Joellyn Kinzer, a cello player, invited a dozen like-minded musicians to her living room for some baked goods and a chance to play together.

“Reston was a great little community, and we thought you couldn’t have a community without an orchestra,” she said. “And we were able to find about a dozen people who agreed.” 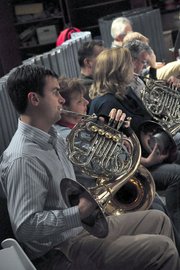 The Reston Community Orchestra prepares for its Nov. 18 show, which will kick off its 25th season.

A quarter-century later, the group that began in Kinzer’s living room is the acclaimed Reston Community Orchestra, who will kick off their 25th season this month.

For their first few years, they were known as the Reston Chamber Orchestra, but after it became assumed that they were a part of the chamber of commerce, they changed their name.

THE GROUP now consists of about 50 musicians who gather every Monday night at the Sunset Hills Montessori School to rehearse. While early members remember coming together as much for the cookies as for the music, now they are all there for the music.

“The minute we got serious, we started attracting very qualified musicians,” said Dingwall Fleary, the orchestra’s music director, now in his 15th year with the group. “As the conductor, I’m really amazed that this is an all-volunteer group. They go and do their regular jobs, and then come to us and help create music at an level of proficiency that’s astounding.”

Fleary said he thinks one of the keys to the orchestra’s success is encompassing a wide range of music.

Dingwall Fleary, music director for the Reston Community Orchestra, conducts the group during practice at the Sunset Hills Montessori School.

“We make a point of featuring music by living composers, as well as the classics everyone knows and loves,” Fleary said. “I’m always looking at what will keep players challenged with a diverse repertoire, but will appeal to all fans of music.”

Principal viola player Gary Mosteller joined about eight years ago. After a stint with the Prince George’s Philharmonic, he was looking for something more local.

“I think we play a great selection of music,” he said. “Dingwall programs a great combination of classics and new music.”

In 2009 the orchestra premiered the fifth symphony of composer David Ott, a Grammy-nominated classical composer.

“David Ott’s piece was just so playful, so quirky,” Everett said. “As a musician, I really enjoyed it, because it was a fun piece to dig in to.”

Oboe and English horn player Pat O’Keefe said she joined about seven years ago after seeing a summer performance.

“I’ve played in a few local groups and bands, but they’re a little short on oboe, but in an orchestra like this, an oboe can shine,” she said. “I’ll always remember a performance of Beethoven’s Seventh Symphony about three years ago. It’s about a 48-minute piece, and after we finished the audience just sort of sat there for about 30 seconds, and didn’t react, and that’s how I knew we really nailed it.”

Kinzer said her favorite shows are ones in different venues around the community.

“We used to play at the [Reston Town Center] Hyatt, they would let us play right in the lobby,” Kinzer said. “The movie theater would provide the popcorn and people would just pack the balcony to watch us. That was a lot of fun to play.”

THE ORCHESTRA’S PERFORMANCES also incorporate their various community missions. The Nov. 18 performance to kick off the season will collect optional “admission” in the form of nonperishable food items for the Reston Community Center Food Drive.

Next year’s Martin Luther King Jr. day celebration will feature the premiere of a piece by local composer Brian Scarbrough, a graduate of Herndon High School. The orchestra had previously premiered one of his symphonies in 2010.

They also perform outreach to local music students, who will be featured in the fourth concert of the season, a May 19 performance that will conclude the season.

“We always try to have at least one youth soloist at these performances, and it’s exciting, because it’s often their first time playing with an orchestra,” Everett said.

Some of the orchestra’s ensembles perform with local musical groups, such as choirs, as another way to stay involved with the community.

“It would be out of reach for some of these groups to hire and pay for an ensemble, but our players are willing to help out whenever they can,” Fleary said. “They’re the type of musicians that love playing whenever they can.”

Fleary said he hopes to increase the educational outreach of the orchestra in future years. He admits it will be difficult, but they plan to reach out to more private and schoolteachers, as well as continue their current level of involvement.

“Over the next five to 10 years, I’d like to see us continue to give to this community at the level we’ve been able to over the past few years,” Fleary said. “We’ve established a pretty good identity here, and if that was lost, I think there would be a big hole in this community’s cultural identity.”

More information on the orchestra can be found at www.restoncommunityorchestra.org.