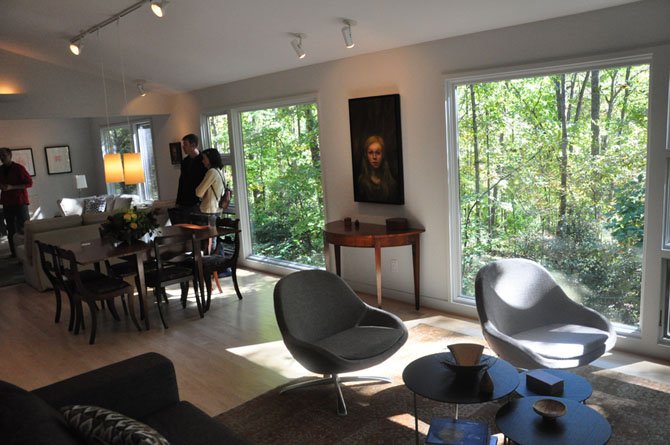 The living room of the home of David and Joanne Bauer, which faces the Glade stream valley. The home was one of several on the annual Reston Home Tour Saturday, Oct. 13. Photo by Alex McVeigh.

Reston — This year’s Reston Homes Tour featured the usual assortment of houses featuring exceptional architecture, interior design and other unique designs, but this year’s theme also focused on the adjacent areas. “Living on the Edge,” the theme, was designed to highlight how various Reston residents are making do while living near some kind of community feature. 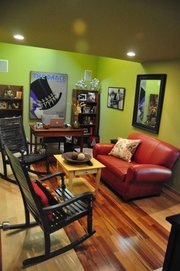 The office of the home of Bill Beyer and Laura Urgelles, one of the stops on this year’s Reston Home Tour.

The neighboring homes of Connie Slack and Bill Beyer and Laura Urgelles on Cutwater Court share many things in common. The main feature of both is that they are located on Lake Thoreau. They also share the same woodworking, by Desantis Design, which constructed doors, trims and cabinetry in the home of Beyer and Urgelles, and cabinetry made of bird’s eye maple in Slack’s home.

“The woodwork in both houses was just breathtaking, it’s so pretty it almost makes the views of the lake an afterthought,” said Sharon DeBarre of Vienna, who went on the homes tour for the first time this year. “Usually cabinetry is an afterthought, or maybe you just notice the color, but I could stare at these for hours, the grain, the intricacy of the design is just amazing.”

Slack originally moved to Reston on Sugarberry Court, located off Glade Drive, but once she heard that lots on Lake Thoreau were available, she decided to make another move.

“What more can you ask for than a house on the water without the Bay Bridge to cross?” she said.

ANOTHER HOUSE ON THE TOUR located on the water was the residence of Matt Lammers on Lake Audubon. Bought when he was only 28, Lammers and his father, both architects, designed a renovation plan that allowed the work to be done over a number of years.

The work transformed the house by adding 2,000 square feet to the 1,800-square-foot house, adding six remote control skylights in the two-story atrium and a two-level curved wall.

“This house is simply beautiful, simple, elegant but unlike almost anything I’ve seen before,” said Tommy Castle of Reston. “I really like how the walls were white,

clean, and how there was only one or two paintings, simple ones, in each room. It makes everything seem so wide open.”

Most of the pieces are by artist Ginny Herzog of Minneapolis, Minn., whose abstract paintings reference architecture. His house also features paintings by Slack, a fellow Reston lake-dweller. 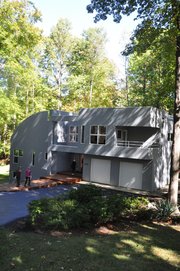 The modern home of Matt Lammers, next to Lake Audubon, one of the stops on the Reston Home Tour Saturday, Oct. 13.

The home of David and Joanne Bauer also features plenty of artwork on the wall, also by a local Reston artist. In fact, Joanne Bauer has created most of the pieces on display in her home in her studio, with her sons Reid and Ian the subject of many of them.

“I think it’s really cool to have your own paintings, particularly of your children, hanging all over the house, [it] really lets you feel truly at home,” said Jen Southern of Herndon. “They are so fascinating too, not your typical child portraits, your eye just goes straight to them.”

David Bauer is an avid birdwatcher, which makes their house’s location next to the Glade stream valley ideal for his hobby.

FROM THEIR LIVING ROOM with large picture windows facing the woods, he can spend each morning with coffee in one hand, binoculars in the other.

“I think the homes along the lakecoffered some great views, but I’vecalways been more of a forest person, which made this house my favorite on the tour,” said James Coleman of Reston. “I don’t think there is anything better than watching the woods in the rain, and this would be the perfect place to do it."