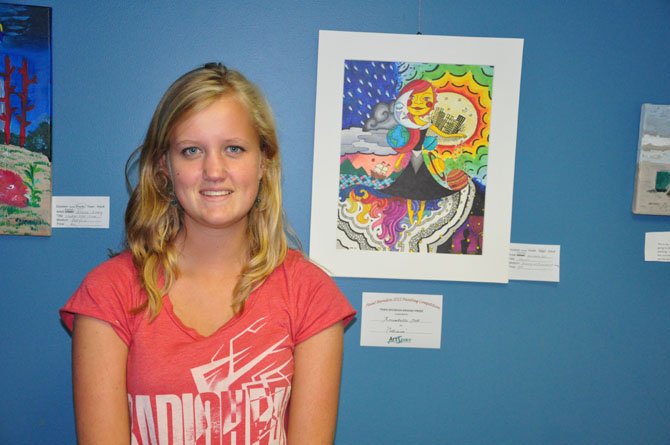 Annabell Goll, winner of the teen division at the annual Paint Herndon competition Saturday, Sept. 1, with her painting, "Collision." Photo by Alex McVeigh.

Herndon — Hannah Cameron Cadenazzi came into this year’s Paint Herndon with some big shoes to fill. Her sister Mhairi won the youth competition last year, and Hannah aimed to do the same thing: spend Saturday, Sept. 1, painting her entry for the annual art contest.

The family continued their streak this year, as Hannah Cameron Cadenazzi won the youth division with her painting "Sisters," her first oil painting. 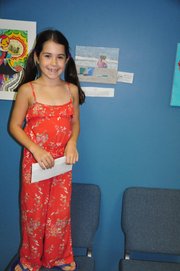 Hannah Cameron Cadenazzi next to her painting, "Sisters," which won first place in the youth division Saturday, Sept. 1, at the annual Paint Herndon competition.

"I was sitting down thinking what painting I was going to do for the contest this year, and I told my mom I wanted to do an ocean painting," she said. "I decided to paint a picture of my sister and me at the beach in Newport this summer. My painting is an Impressionist painting, so you have to step back to see the true thing."

Judges Gennara Moore and Pat McIntyre said they were impressed with her work, as she entered several pieces.

"We really enjoyed the write up she did, and she also did another piece that was like a Jackson Pollock piece that was Impressionistic as well," Moore said. "We hope she sticks with painting, and we hope to see her next year."

Artists spent the day creating their works, and competed in youth, teen and adult categories. In addition to Hannah Cameron Cadenazzi, Annabelle Goll won the teen category for her painting "Collision" and Jill Banks won the adult category for "Fresh Bread," which was of the corner of downtown Herndon with Great Harvest Bread Company.

"[Annabelle’s] piece was called ‘Collision’ which was a really interesting title for [it], it was the drawing done with markers and pens and it was really, really joyful, so the title told us a lot about the artist’s intention and a lot of what she was doing internally, and I was impressed by that," Moore said. "I think we can all agree that Jill’s painting had such a glow to it, you could almost smell the fresh bread, and if you’ve been around that corner, you know exactly what that smell is."

Though Banks won for her depiction of a signature spot in Herndon, the contest subjects weren’t limited to the town, as in previous years.

"We wanted to make it more open, to let the artists have more flexibility in what they chose to paint," said Robin Carroll of ArtSpace. "We also opened the outdoor activities a bit more, we held them on the side of the building closer to the municipal parking lots, it became a more of a sidewalk art display."

The street next to ArtSpace was filled with local art exhibits and a stage for guests to perform karaoke throughout the day.

"I’ve been here every year since they’ve started, and I think logistically and when it comes to activities, they’ve improved by leaps and bounds every year," said Janet Herr of Herndon. "I think next year if they could bring in some more artists and activities along the street, it would truly be a sidewalk art show, perfect for the Labor Day weekend."