A candlelight vigil for the victims of gun violence and to demand action from Congress on gun violence prevention legislation was held Saturday, April 13, in Market Square. The candlelight vigil was sponsored by Organizing for Action and Alexandria’s Concerned Citizens against Gun Violence. Other local organizations supporting the event included the Million Mom March of Northern Virginia, and Moms Demand Action and MOURN — Mothers United for Reform Now.

International advocate for civil, human, women, children and victims rights William Killibrew speaks of his own experience as a child experiencing gun violence that left his mother and siblings dead in their home.

Residents and supporters of sensible gun laws gather in Market Square for a candlelight vigil for the victims of gun violence and to demand action from Congress on gun violence prevention legislation. 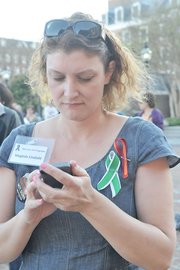 During his remarks, William Killibrew asks all present to add the number of the congressional switchboard to their cell phones in order to call their congressional representatives and senators and express their support on gun violence prevention legislation.

President of the Virginia Chapter of the Million Mom March Martina Leinz — surrounded by Million Mom March supporters — recalls the killings by 16-year-old Brenda Ann Spencer. On Jan. 29, 1979 Spencer took out a rifle given to her as a Christmas present and from her home shot at a San Diego elementary school killing the principal, the building engineer and injuring eight students. Spencer later said she shot at the school because, “I don’t like Mondays.” Leinz pleaded for citizens to get involved and pressure their representatives to vote for meaningful gun violence prevention legislation.