The Ice Skating Pavilion in Reston Town Center is a hot destination. 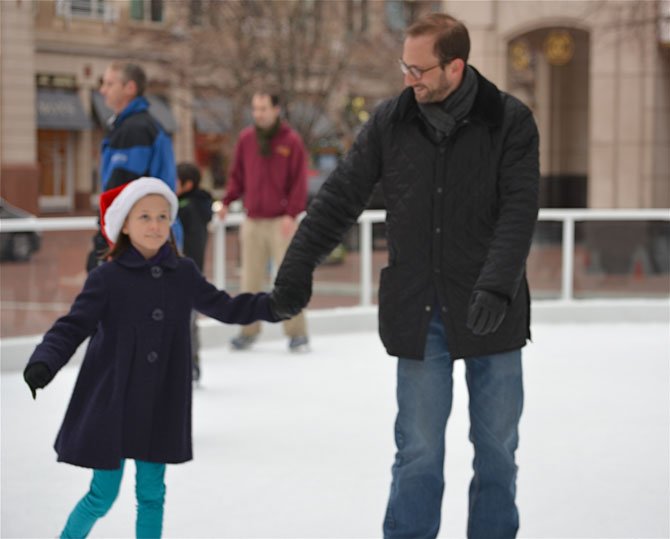 Lila Sheingate hangs on to dad Adam. The pair came in from Baltimore to visit Reston relatives. When asked if Miss Lila thought she was ready for Sochi, she replied, "Well, maybe!" Confidence is key. Photo by Andrea Worker.

The temperature was holding pretty steady in the lower 30s, there was ice off the rink as well as on it, and the occasional snow flurry drifted about Reston Town Center on Saturday, but none of those potential obstacles kept the Ice Skating Pavilion from being plenty packed. Although there were a few skaters with obvious skills making the rounds, it seemed that the majority were more suited to the novice category, judging by the numbers of flailing arms, "derriere skaters" and the amount of time the staff spent helping would-be Apolo Ohnos and Ashley Wagners regain their skates and their balance. It was also pretty obvious that no matter what level of expertise each skater brought to the arena, everybody was having fun.

Gliding in and out of the fairly controlled chaos were two familiar, if rather startling figures – Scooby Doo and Tweety Bird. Turns out that Saturdays are "Cartoon Skate" days. Between 11 a.m. and 1 p.m. a variety of beloved cartoon characters take to the ice, much to the delight of the younger crowd. "That’s one of the reasons we’re out here today," admitted Leah Almandor of Reston. Almandor’s 3-year-old son Mitchell is a big fan of Scooby Doo. "Of course, I’m not sure he will ever learn to skate if he spends all his time trying to watch the characters," she acknowledged. 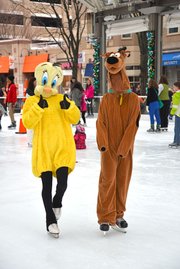 Scooby Doo and Tweety Bird glide along at the Reston Town Center Ice Skating Pavilion. A big hit with the younger skaters – and a few of the young at heart, as well –the two are part of the rink’s Saturday Cartoon Character Skate. Scooby assured us that he would be there for many more Saturdays to come.

Sharing the ice with Scooby and Tweety Bird were attendees from several birthday parties, a Girl Scout Troop from the All Dulles Area Muslim Society (ADAMS), another from Landsdowne, and even an official skating class being held in the middle of the rink. Teacher and students did an amazing job of concentrating, despite the distractions all around. And it seems that the skaters came from all parts of the Northern Virginia area, as well as from places way beyond our Commonwealth’s borders. Asking the question "Where are you from?" (mostly of the rail-huggers as they inched by) got a wide variety of answers from Manassas to Baltimore, Leesburg to Annapolis, and from Romania to Brazil. Despite the near-freezing temperatures, apparently the Ice Skating Pavilion in Reston Town Center is one hot destination. Could be the fact that it’s an outdoor venue in the middle of a mini-city and that it offers the extras like the Cartoon Skate Days and Friday night "Rock’n’Skates" with a DJ, games and prizes until 11 p.m.

The Skating Pavilion will be open until March, so there’s plenty of time to take to the ice, or just enjoy the show from the sidelines with a cup of hot chocolate from one of the local food and beverage outlets to keep you warm.