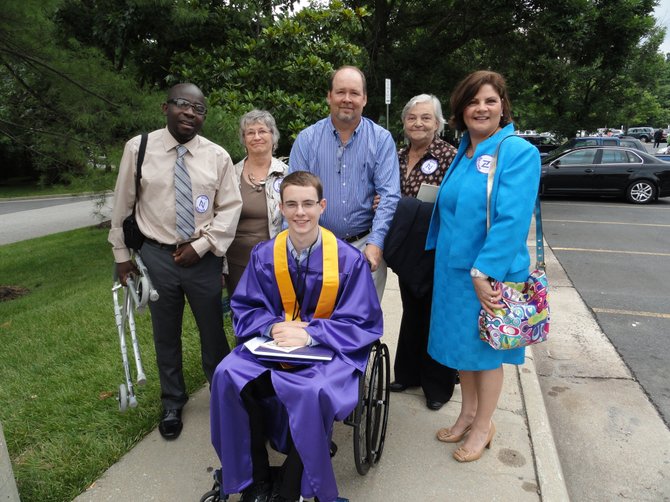 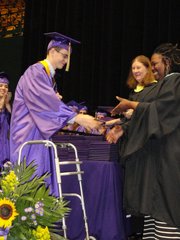 Every Lake Braddock senior who walked across the George Mason University Patriot Center stage for a diploma received applause and praise for 12 years of hard work.

But only one student received a standing ovation for simply walking.

Nick Balenger, a pitcher for the Lake Braddock Bruins baseball team, was paralyzed in a diving accident in Hawaii last summer. His doctors told him he might never walk again.

Balenger was determined to prove them wrong.

On Wednesday, June 19, in front of nearly 700 classmates and their families, Balenger did just that. 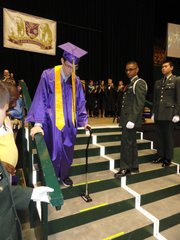 Nick Balenger exits the stage with a cane during Lake Braddock's graduation at the GMU Patriot Center.

Leaning forward in his wheelchair throughout the ceremony, Balenger was focused and a little nervous as he waited for the awarding of the diplomas. When his row was called, he stood up with the help of a walker and took about 50 steps up the ramp to the stage where he waited for his name to be called.

When it was, he walked across the stage and accepted his high school diploma. For the first time that morning, the Burke teen smiled. Switching to a cane, he began walking down the steps of the stage, and the crowd came to its feet in a thunderous standing ovation. 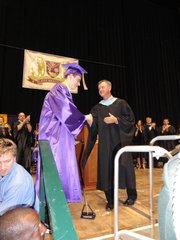 “I feel great, very relieved,” Balenger said after sitting back down. “I was kind of nervous, but I practiced this morning. This has been my goal, to walk across the stage on graduation day. I’m just glad it’s over.”

“It was so emotional to see him walking again. Everyone is so proud of him,” said Debra Brown, a student counselor at the school, as classmates gathered around Balenger.

“He is a force of nature,” said neighbor Chris Bachman. “We were all cheering for him.”

“He has worked so incredibly hard to get to this point,” said Sylvie, Balenger’s mother. “It was quite a sight to see him walking across that stage to get his diploma.”

FOR THE PAST 11 MONTHS, Balenger has spent every day pushing himself to move. Every time he felt a sensation in his fingers, his hands or his feet, he doubled and tripled his “repetitions” in physical therapy to make certain he would not regress.

“My doctors thought I probably wouldn’t be able to move my legs, let alone walk, but I did not want to be one of the patients who could not get out of the wheelchair. So I just kept moving,” Balenger said.

Balenger said he plans to attend James Madison University, his father’s alma mater, next fall, after another year of intense physical rehab. 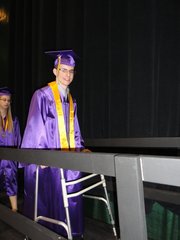 Nick Balenger uses a walker to go up the ramp at GMU's Patriot Center stage.

Last June, Balenger was actively recruited by many colleges as a star athlete, and he was looking forward to a “dream” summer. A pitcher for the Lake Braddock Bruins baseball team, Balenger was ecstatic when the team won their first baseball state championship.

He said he was looking forward to spending an “awesome” summer vacation with his family on the island of Maui, where he was born.

But on July 25, 2012, his first day in Hawaii, his vacation took a tragic turn: Balenger dove into a wave and broke his neck in two places. The accident left him paralyzed from the neck down.

“I was pulled out of the water by my dad. In an instant, [everything] was ripped away. Most of my family was 6,000 miles away, my baseball career was over, the chances of me walking again were next to none and school was the least of my worries. I thought my life was over,” Balenger has said.

On July 31, 2012, Balenger spent his 17th birthday in the same hospital where his life began.

After two surgeries to stabilize and fuse his spine, Balenger spent 19 days in an ICU on Maui, and 67 days as an inpatient at a rehabilitation hospital in Washington, D.C.

“This has been my goal, to walk across the stage on graduation day. I’m just glad it’s over.”

Two-and-a-half months after his accident, Balenger took his first tentative steps. Two months after that, he began moving around his house, walking hundreds of steps in therapy and he began to walk up stairs.

“Doctors have been amazed at his progress,” said Steve Balenger, Nick’s father. “We see his progress a little bit every day, but when the doctors see him, after three or four weeks, they can’t believe how far he’s come. This kid works his butt off. He inspires me.” 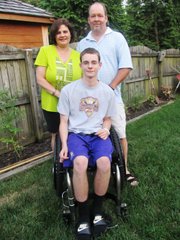 Nick Balenger with his parents, Sylvie and Steve, at their Burke home after Lake Braddock Secondary School's graduation June 19.

BALENGER ALSO INSPIRED HIS CLASSMATES. Throughout his senior year at Lake Braddock, he used a wheelchair to navigate the halls, so most of his classmates did not know he was determined to walk again.

“It was so awesome to see him walk across that stage,” said graduating senior Lynne Baker.

In her honor graduate address, student Sophie Chase, who is headed to Stanford University in the fall, talked about the strength, kindness and humility that were hallmarks of the Class of 2013.

“You have continually inspired me and I always loved coming to school. We've learned so much together. I know a student who played baseball, and I know he will play baseball again,” Chase said.

She ended her remarks with a line from the popular teen film “The Perks of Being a Wallflower,” a line that could easily apply to Balenger.

“In this moment, we are infinite.”