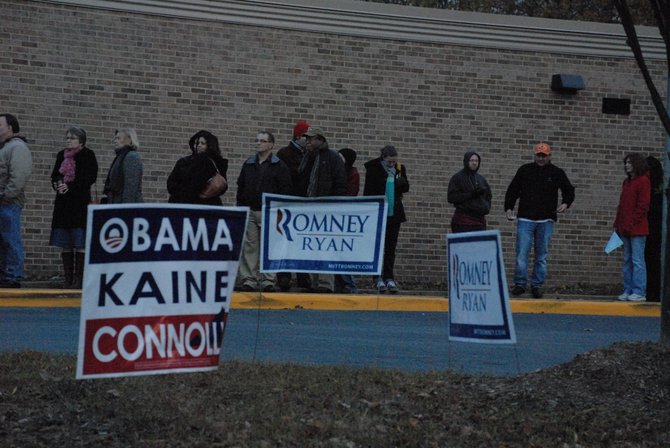 Voters line up in front of the Great Falls Library Tuesday, Nov. 6 to cast their votes.

After learning that dozens of frustrated voters waited for hours in long lines to cast their ballots on Election Day, Board of Supervisors Chairman Sharon Bulova (D-at-large) called for the creation of a bipartisan commission to figure out why and make sure it doesn’t happen again.

"The commission has identified a variety of improvements and efficiencies to ensure access and convenience for voters in future elections.”

Voters wait their turn at the Lewinsville Center Tuesday, Nov. 7.

Voters stand in line at Colvin Run Elementary School at 6:30 a.m. during the morning's heaviest turnout.

At the March 19 Board of Supervisor’s meeting, the commission—jointly chaired by Former Board of Supervisors Chairman Kate Hanley and Stuart Mendelsohn, former Dranesville supervisor—released its final report. They recommended additional poll workers, more training and better technology to keep lines moving.

“I am pleased that the Election Commission has completed its work,” Bulova said. “It is important that the county implement measures to reduce long lines, decrease wait times and streamline the election process in Fairfax County. The commission has identified a variety of improvements and efficiencies to ensure access and convenience for voters in future elections.”

In conjunction with the State Board of Elections, the County recently kicked off a voter preparedness campaign—"Are You Election Ready"—to inform and educate voters on changes.

Additional recommendations included using electronic poll books at every precinct, and asked the county to create a fund that would pay for upgrading voting equipment. The report also suggested that county officials find larger polling places where voters can form lines inside precincts rather than outside during bad weather.

Voter turnout in Fairfax County on Election Day was at an all-time high in November’s presidential election, with 81 percent of registered voters casting their ballots in 2012 compared to 78.7 percent in 2008. In the 2011 state and local elections, just 32 percent of registered voters cast their ballots, while 49 percent turned out for the 2010 congressional contests. 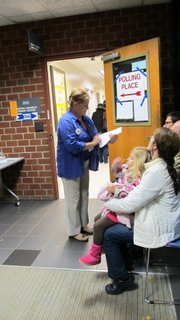 Voters at the Reston-Herndon Senior Center were able to form lines inside the center on Election Day before they cast their ballots.

Lines and wait times varied throughout the county’s 237 precincts last November. Voters at Vienna’s Flint Hill Elementary School reported ample parking and virtually no lines. At other locations, however, lines snaked around elementary school parking lots and through buildings, and it was not unusual for voters to have to wait over an hour.

Election officials said a shortage of poll volunteers coupled with complicated ballot questions and bond issues meant some voters took much longer to finish their ballots.

While the long lines created headaches for many Fairfax County voters, some voters in Prince William County faced five-hour waits before casting their ballots.

A copy of the report can be found at http://www.fairfaxcounty.gov/electioncommission/election-commission-report.htm.