Parents teamed up with local high schools and volunteers from the Children’s Science Center for an evening full of fun. 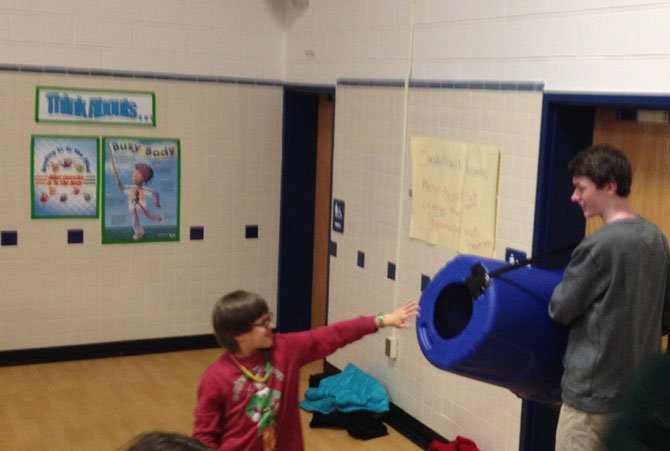 Students packed the Great Falls Elementary gymnasium on the evening of Monday, Feb. 3, to learn the answers to questions such as "What is a polymer?" and "How is a vortex ring made?"

Great Falls parents and organizations organized the Science, Technology, Engineering, and Math (STEM) Career Night to challenge students with fascinating questions and even more fascinating answers. Main speaker Dan Tani, a NASA astronaut and engineer, awed students with stories of his time aboard the International Space Station, which he traveled to in 2001 in the Endeavor Space Shuttle.

"What’s different about space than here on Earth?" asked Tani to a crowd of students that included his daughters Keiko and Lily. "Up in the International Space Station you don’t stand, because there’s no gravity to pull you down. We had areas all over the walls where you would put your toes in so you could stand on the walls or the ceiling."

In addition to hearing from a real astronaut, students and volunteers enjoyed presentations by area programs focused on STEM education. Digital Kidz, Faifax County’s official provider for children ages 4-14, operated a stand featuring robots that students could build out of simple materials like Legos, and then control with software on tablet computers.

Great Falls Elementary Principal Ray Lonnett pointed out the diverse array of STEM professionals whose children are students at the school. In addition to Tani, parents such as journalist Asra Nomani, as well as physicists, engineers, and patent lawyers, manned booths around the gymnasium ranging from Science Journalism to Weapons Technology and Engineering of the 2014 Olympic Winter Games.

"Tonight is really a way of bringing together that parental support and showing the kids the relevance of what they’re learning at school, how the things their parents do for a living apply what they learn in math and science to the real world," said Lonnett.

The Children’s Science Center, a Herndon-based nonprofit that aims to expand hands-on STEM education activities to Northern Virginia, hosted STEM Career Night last year, and helped by bringing volunteers this year. Board Member Lee Ann Brownlee said that while the Center was unable to host the event for 2014, she was able to work with the PTA by emailing parents in STEM professions to put together another evening filled with hands-on learning and interesting speakers.

"We had such a great turnout last year and so many people were excited about hands-on science," said Brownlee. "The parents really are the key to the success. They came up with all of the activities here on their own," she continued, gesturing to a STEMbassador closeby producing airborne smoke rings with a Vortex Cannon.

PRINCIPAL Lonnett and Brownlee both stressed the value of problem-based learning, which gives students opportunities to learn about subjects firsthand through problem-solving activities, rather than simply through lectures.

"It’s neat because we’re getting to see the volunteers do hands-on activities with the kids," said Brownlee. "It’s been a very fun experience to see it all come together tonight."