Community theatre group presents a musical based upon the gospel according to St. Matthew. 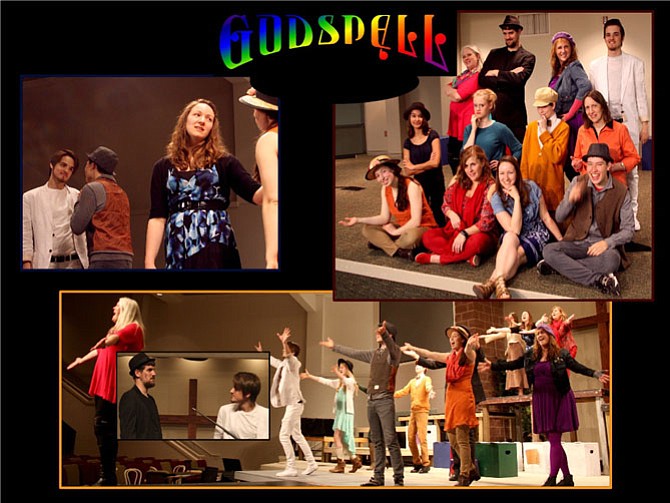 Tickets will be on sale each night at rates of $15 general admission and $12 for students/seniors.

Fairfax community’s newest theatre group, Popes Head Players, presents “Godspell” on April 22-24 and April 28-30. The cast of twelve not only includes students from Sovereign Grace Church Youth Drama Club (which has been performing for eight seasons), but includes a multigenerational mixture of teens and adults from the local community.

The group has been rehearsing since February. Cast member Nancy McGovern said, “The rehearsal process has been exactly what ‘Godspell’ is all about, an extremely eclectic group of people coming together to form a community guided by Jesus.” “Godspell” brings the parables of the Bible to life in a fun and whimsical way.

The history behind “Godspell”: “Godspell” began as a student master’s thesis project at Carnegie Mellon University in 1970. The original production was a collection of improvised scenes based on the Gospel according to St. Matthew and music based on traditional hymns created and directed by John-Michael Tebelak. The show transferred for a ten week run to New York City’s La Mama Experimental Theatre Club in 1971. Producers interested in opening the show Off-Broadway approached composer Stephen Schwartz about writing new music and lyrics. With a new score, “Godspell” became one of the longest-running Off-Broadway musicals, before moving to Broadway in June 1976. It ended its run in September 1977 with a total run of more than 2,600 performances.

This production of “Godspell,” produced by the Popes Head Players, begins with beatnik philosophers set in a 1950s coffee shop who quarrel over their personal beliefs on knowledge, reality, and existence. They then hear a trumpet sound from a traditional Hebrew shofar and heed the words of John the Baptist, played by Anthony Weaver, to “Prepare ye the way of the Lord.” The cast then converts from a group of beatnik “know-it-alls” to a community of baptized followers of Christ who still need to learn how to be followers. Each character has a personal transformation as Jesus shares stories and parables taken from the book of Matthew to help his new followers understand who Jesus is and why he came to Earth.

Patrick Maresco plays Jesus, a part not new to him as he portrays this main character for the second time. “Saying the words of Jesus taught me about the character of Jesus and how much he really cares about me as an individual…His words speak directly into my life. That is something that didn’t really hit me until I did Godspell. Each time I go to rehearsal and do the play it is a great reminder of that, ” Maresco said.

This is John Newman’s fourth time directing Godspell which illustrates how much this production is a favorite of his.

There will be concession sales and a special raffle with all proceeds going toward a charity called No Ordinary Love, one of the few organizations currently working closely with the government of Ethiopia to take in children who have been rescued from human trafficking. See: http://noordinarylove.org/