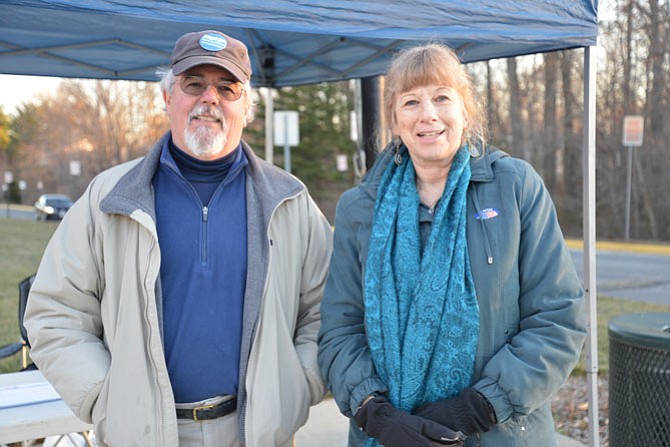 Democratic Precinct Capt. Richard Chew and voter Nancy Olds braved the early morning chill on Super Tuesday at the South Lakes High School polling place in Reston. “This is a heavily Democratic precinct,” said Chew, “but I think there has been a higher percentage of Republican turnout this year. People are really engaged.” Photo by Andrea Worker.

Fairfax County Republican Party volunteer Scott, signs up Deborah Ellinthorpe as a campaign volunteer. Ellinthorpe is liking Bernie Sanders or John Kasich as potential presidents, but particularly likes that “voting in Virginia gives me a choice, either side.” A former resident of Louisiana, she said that in elections past she was forced to vote only along party lines. “I want to vote for something, not against. Never again do I want to have to hold my nose when I pull that lever.” 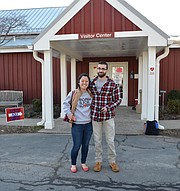 Frances Dong and William Haskell, voting at Frying Pan Park in Herndon, would like to see Bernie Sanders win the day. “Immigration, taxes and education are the issues for us,” said Dong. “Especially education,” added Haskell. “We would like to further our education but we just got out of that debt and don’t want to jump back in it.”

“I believe this really is one of the most important elections in our lives. The outcome could affect our country and the world for the rest of this century.” So said Carole Foryst as she manned the Fairfax County Republican Committee information site at the South Lakes High School polling place in Reston. No lines, but the steady stream of voters at South Lakes, Hunters Woods Elementary, Herndon Middle School and Frying Pan Park in Herndon seem to indicate that many voters are taking their civic responsibilities seriously this year. “It looks like a pretty good turnout,” said Dorothy Jean Hankinson, a Chief Elections Officer for the county, stationed at Frying Pan Park. Hankinson previously worked the absentee balloting event and noted there were about 400 ballots cast the whole day. By 8 a.m. today, some 158 voters had already been signed in. “That’s encouraging,” she said.

Outside the Frying Pan Visitors Center doors, Anders Warga was greeting voters as they arrived, offering materials and recruiting campaign volunteers for the local Republican Committee. Unlike the often fractious tone and less-than-mannerly behaviour exhibited at some of the presidential debates and gatherings, Warga reported that most of the people he spoke with were friendly and respectful, no matter which side of the political scale they occupied, although “there have been a few rude comments,” he noted.

Perhaps it was the presence of Charlie the service dog at Hunters Woods Elementary in Reston that helped put the voters in a more cheerful frame of mind at that location. Border collie Charlie was assisting his owner, Alan Gersman, who is a first time campaign volunteer for the Republican Party.

“My wife and I, we decided that it was time to do something. Forty years ago, we could start a business and we worked hard and did well. Now, it is hard for young people. They can’t get loans from the banks. Things seemed stacked against them. So, whatever we can do, we will.”

In a somewhat controversial move, Fairfax County voted to cancel classes on this election day, citing security concerns. Some officials worried that the “pledge” requirement put into place by the State Republican Committee requiring voters to affirm their Republican Party affiliation before receiving a ballot could lead to disruptive behaviour by supporters of Donald Trump, who has criticized the move. Democrats are not required to attest to such a pledge in Virginia, where voters are allowed to choose from either party. “Whatever the reason,” said Sunish Kayram of Reston, “the school being closed probably helped make the process easier, certainly the parking, and if it helps keep our kids safe, all good.”

We will all have to await the final count, but at least a few of our local citizens were willing to speak out on who they support and why. Despite his national numbers and seemingly insurmountable lead, only two of those questioned named Trump as their candidate, and only after saying that Gov. Kasich of Ohio, who trails significantly, would have been their first choice. Clinton got the thumbs up from most of the Democrats asked outside of the four polling sites visited, although Sanders supporters seemed perhaps the most enthusiastic about their candidate.

“Whomever you vote for, just be sure to vote,” was Elections Officer Hankinson’s request. “And how about becoming a paid Elections Officer for the November election. Check out www.fairfaxcounty.gov/elections. We need a thousand more of you!”