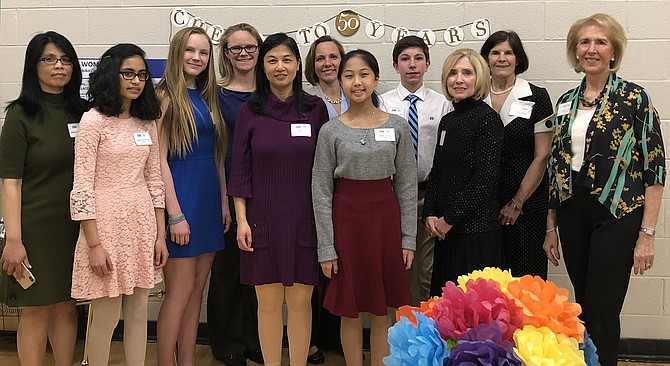 The winners of the first STEM Essay Contest sponsored by the McLean Area Branch of American Association of University Women (AAUW) were recognized at the branch's annual dinner on March 19. The contest was open to seventh and eighth grade students at local public and private schools. The students were asked to discover and publicize a woman who made a difference in Science, Technology, Engineering, or Mathematics, discussing why the student selected the woman and what the impact of her STEM contribution was.

The winners of the contest are:

As part of the awards ceremony, the First Place winner, Isabella Cai, read her essay on Rosalind Franklin, a pioneer in the discovery of the DNA double helix theory.

Other women who were the subject of the winning essays are Chien-Shiung Wu, a nuclear physicist who contributed to the Manhattan Project; Augusta Ada King, Countess of Lovelace, the creator of the first computer program; Hedy Lamarr, film actress and inventor of spread spectrum and frequency-hopping technology; and Gladys West, a mathematician whose models were incorporated into the development of GPS.

For more information on the McLean Area Branch, visit the branch website at http://mclean-va.aauw.net.