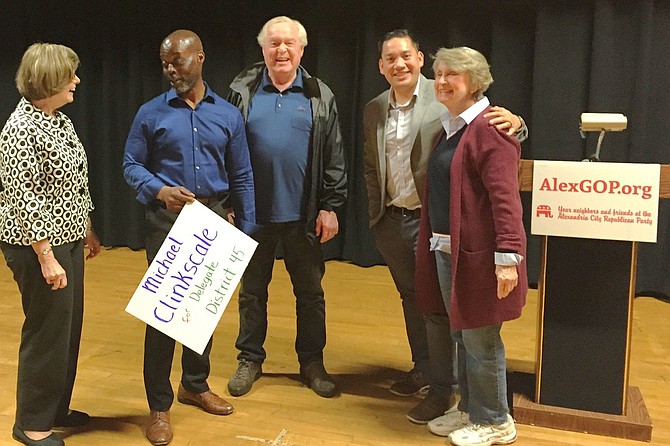 ARCC members and guests congratulate Michael Clinkscale on his announcement to run for the House of Delegates. From left are Laurie Kirby, Clinkscale, Lou Miller, Patrick Benitez, and Susie Miller. Photo contributed

The Alexandria Republican City Committee’s (ARCC’s) April meeting focused on the city’s proposals for reducing the number of driving lanes on Seminary Road, a busy east-west route in Alexandria, in order to add bicycle lanes. Though the road is already considered safe by the local residents, ARCC Chairman Sean Lenehan expressed concern that significant changes could be made in spite of overwhelming community opposition, as with the recent City Council approval of the poultry slaughterhouse.

Linda App, ARCC member who had attended a recent city-sponsored Open House event on the project, gave a presentation on the alternatives being proposed by the city, and explained the city’s decision process and deadline for comments. Other members expressed concern for the impact of lane reduction on: emergency vehicles’ response times, traffic flow, and the increased dangers of mixing vehicles and bicycles. Members also criticized aggressive bicyclist behavior and the perceived new city preference for bicycles over cars in this densely-populated area.

Lenehan said, “This is not a Republican or Democrat issue. This is a community issue. Most of us don’t or can’t ride bikes to get to work and run errands. Families can’t travel by bicycle. We need practical solutions, not social-engineering to end the use of cars.”

Michael Clinkscale, a recent candidate for Alexandria City Council, announced his candidacy for the Virginia House of Delegates, District 45. He spoke of his message of independence for every individual, and that “the only limits we have are those we put on ourselves.”