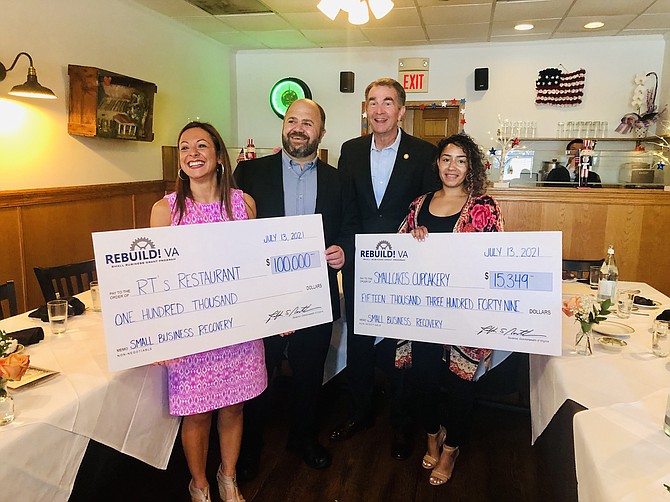 Two weeks before the pandemic, George and Maria Christou purchased the storied Arlandria restaurant RT's. It seemed like they were just opening the doors on a dream come true. But then the world turned into a nightmare. They were forced to shut down, closing their doors and trying to figure out how they were going to navigate through dark times. The first step was getting ahold of money from the Paycheck Protection Program.

"We had 27 employees when we got the place, and we were able to bring 10 of them back," said George Christou. "Most of them were just sitting around because we were not that busy at the beginning. But we wanted to give people their jobs back."

"We're actually thinking about taking crab cakes off the menu because you don't want to charge customers $60 for a dish."

Now that the pandemic is fading into a bad memory, Alexandria's hospitality industry is at a crossroads. All that federal assistance was gone long ago, and now Christo is receiving a boost from the Rebuild Virginia Economic Recovery Fund. Gov. Ralph Northam was at the restaurant this week, enjoying some calamari and handing over a check for $100,000. Christou says it'll help him make payroll, but his business is still hampered by a supply chain gone haywire.

"We're actually thinking about taking crab cakes off the menu because you don't want to charge customers $60 for a dish," said Christou. "About a month ago, the cost of salmon just doubled. So every week, it's something different."

THE HOSPITALITY INDUSTRY has been at the center of Alexandria's business community since colonial times. These days, it remains central to the economic health of the city. Census records show that before the pandemic, Alexandria had 350 restaurants with 6,700 employees and an annual payroll of $153 million. Returning to those numbers is proving difficult because the labor market isn't supplying enough workers for the pay that's being offered.

"I have a very pleased 16-year-old in my home who is thrilled about the inability to find staff because he's now working for $15 an hour in a restaurant," said Mayor Justin Wilson. "So it's great for teenagers right now, but it is a challenge for a lot of our business owners."

Alexandria's hotel industry is facing a different set of problems, one driven by a lack of business travel. Census records show that before the pandemic, Alexandria had 22 hotels with 1,400 employees and an annual payroll of $43 million. Although other parts of Virginia have seen their hotel industry recover, Northern Virginia is lagging behind because of the lack of the conferences and events that draw people to the region.

"Leisure is coming back, but business is not quite there yet," said Virginia Secretary of Commerce Brian Ball. "Hotels in other parts of the state like Virginia Beach have seen more uptake in their business than I've heard in Northern Virginia, where you have more business travelers."

"Leisure is coming back, but business is not quite there yet."

IN SOME WAYS, the hospitality industry is now thriving again as tourists return to the nation's capital and flock to the city's well-known restaurants. In other ways, many people are still struggling as business travel remains moribund.

Earlier this week, Marriott formally notified Virginia officials that it would be laying off 89 employees from its hotel at the Key Bridge, a devastating setback for dozens of families.

"When you get a notice that folks have been laid off, that's the hardest," said Matt de Ferranti, chairman of the Arlington County Board. "Our hotel industry has really taken a hit, and we've seen a real loss in Rosslyn and Crystal City."

Performing arts venues are now open for business again, although they are dealing with a separate set of problems. Census records show that before the pandemic, Alexandria had 23 performing arts venues with 300 employees and an annual payroll of $19 million. Many of those workers are waiting for touring acts to get back on the road so they can get back to work.

"What we're hearing from music venues is that even though capacity has been changed and they can welcome people, there's a really slow tail for national performers to get back out on the road," said Stephanie Landrum, executive director of the Alexandria Economic Development Partnership.