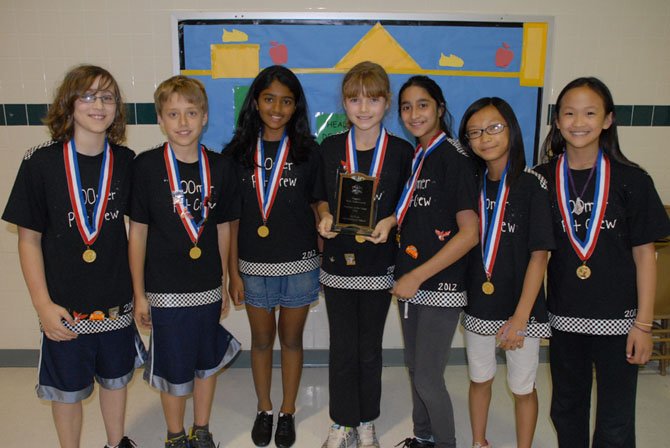 Your problem, should you choose to accept it, is this: Use a word or words to make a first and last name. You must relate this name to an occupation. You will have one minute to think and three minutes to respond. You must be creative. Boring responses will not earn you a point. Examples of creative responses are: Minnie Ster is a pastor, Clara Net is a musician or Ali Gator is a marine biologist.

Two teams from Reston will be challenged to answer questions such as this at the upcoming Odyssey of the Mind World Finals. Teams from Langston Hughes Middle and Hunters Woods Elementary will be competing against other teams in their age division from across the country at the 33rd Annual Odyssey of the Mind World Finals competition to be held in Ames, Iowa, May 23-26.

Odyssey of the Mind is an extra-curricular program open to kindergarteners through college-age students. The program encourages creative problem solving. Odyssey of the Mind teams meet throughout the school year to prepare a long-term problem and to practice spontaneous problems, like the one listed above.

DURING THE COMPETITION the teams will have eight minutes to present their long-term problem. In a separate round, they respond creatively to the spontaneous problem, such as the one shown above. Competitions are held at the regional, state and national level. Only the teams that win first place advance to the next round. The Langston Hughes team and the Hunters Woods team placed first at the regional and state competitions in their age group.

During a recent meeting, the seven team members were talking over each other and finishing each other sentences, eager to explain the play they had written for their long-term problem. The Langston Hughes’ team chose the category of Weird Science. In this category teams are given a NASA satellite image. Then, the team must create a play to explain how this image came to be. The Langston Hughes team was given a picture of the eruption of the Icelandic volcano, Eyjafjallaokull. The play the team wrote has an "Alice in Wonderland" theme with the Red Queen looking for a source of hair dye to give her hair its signature fiery color. The NASA image of the volcanic eruption shows a field of red which the team imagined to be a very large bottle of spilled hair dye.

This team for its long-term project chose to make an Ooh-Emotional Vehicle. As required by the project’s parameters, the vehicle, made of a light-weight frame, bicycle tires and casters, displayed four emotions and can move forward and backward. LED Christmas lights were used to make an expressive face that shows the emotions of pride, fear, guilt and love. Like the Weird Science project, this project also has a theme and a plot. Being James Bond fans, the Hunters Wood team chose a spy theme and titled it: "The Car who Loved Me." Their car, named Oomer or Double OO, must stop the gas guzzler from stealing a microchip.

The teams have been working on their long-term project since the start of the school year. As they advanced through each round, the teams have been tweaking their projects. No parental or adult help is permitted; the projects must be completely the work of the team.

ALL THE STUDENTS INVOLVED said that participating in Odyssey of the Mind helped with "life skills" and helped them think creatively. The upcoming competition caused many of the team members anxiety, however, they were all excited by the opportunity to participate in the World Finals.

Hunters Woods team member, Yukta Chidanandan, summed up opinions best by saying: "We want to have fun and see teams from around the world. We don’t want to get last place, but we also want to have fun."